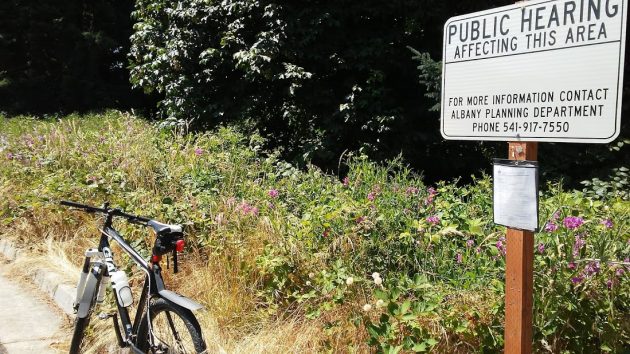 The notice below the sign announces a July 10 public hearing on the Hickory Hollow project.

Building apartments in North Albany is tougher than the zoning makes it appear, as shown by an appeal against the first such project the city staff has approved.

In May the Albany planning staff had approved a site plan for “Hickory Hollow,” a 48-unit complex of four three-story apartment buildings on 2.25 acres north of Hickory Street, west of North Albany Road. The zoning of the parcel allows apartments, and the staff determined that the project met the requirements of the Albany development code.

The apartment zoning, though, is sandwiched in between rows of single-family houses on the property’s north and south sides. And on June 9, neighbors appealed the staff’s approval of the site plan. Their argument is that the development code requires that a proposed development be “reasonably compatible with surrounding development and land uses.” It also requires that “any negative impacts” be “sufficiently minimized.”

What the neighbors would like, according to a letter bearing the names of 14 individuals or couples, is for the two planned apartment buildings closest to single-family houses to be reduced from three to two floors. That would presumably reduce the number of units in the project to 40.

“We request this change to make the proposed complex more compatible with existing surrounding development in the area,” the neighbors’ letter said.

The appeal cost the neighbors a $269 filing fee. They probably figure it’s worth not having people looking down into their back yards from the third floor.

In response to the appeal, the Albany Planning Commission has scheduled a public hearing on the site plan for 5:15 pm. Monday, July 10, at City Hall. I had followed the Hickory Hollow project since January, but (not living in the area) I wasn’t aware of the appeal and scheduled hearing until I rode my bike past the property this week and saw the public notice among all the brambles. Just goes to show you it pays to notice signs and stop to read what they say.

Another apartment controversy, this one north of Hickory east of North Albany Road, remains unresolved. On May 24 the city council continued a public hearing on a zone change covering about 12 acres owned by Portland developer Jim Winkler. The plan was to resume the hearing at some unspecified date, but it hasn’t happened yet. (hh)