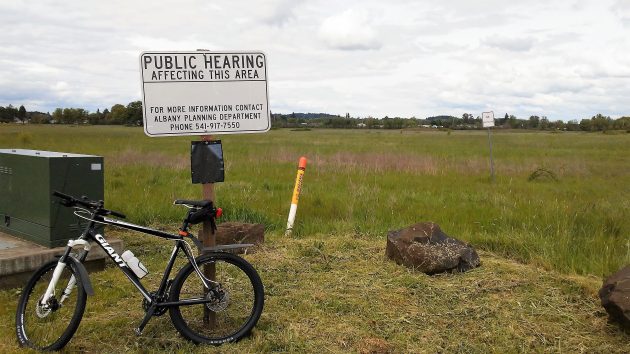 The public hearing advertised on the sign was on Monday night.

This is at the corner of Somerset Drive and Timber Ridge in northeast Albany, and those wide open spaces won’t be quite that wide open for long.

The Albany Planning Commission on Monday night approved a tentative plat for the Sumerset Subdivision, which calls for 142 single-family houses on the now-vacant land north of this spot. But of the 43 acres covered by the plan, nearly 18 acres are designated as wetlands and will be left as open space.

The planning commission’s approval was unanimous. About a year ago the commission rejected a similar development plan for this acreage on the grounds that streets did not connect. In this plat, they do. Somerset Drive is to be extended toward the northeast, and Trinity Street to the southeast until they meet.

This was made possible in a deal with the city of Albany, which is selling the developer 7 acres, which the city acquired a few years ago as part of a much larger acreage in lieu of foreclosing on an assessment for the costs of building Timber Ridge Street. The street construction was necessary to serve Timber Ridge school, then being planned.

MBBH Development LLC, the Corvallis firm of Myles Breadner, plans to develop the subdivision in four phases of 29 to 41 units each.

The development pattern looks a little denser than the subdivisions west of it. There will be about seven houses per acre. The average lot will have about 6,000  square feet, and the smallest 4,120. A band of open space along Truax Creek forms the northern boundary of the development. Timber Ridge School lies a few hundred yards to its south. 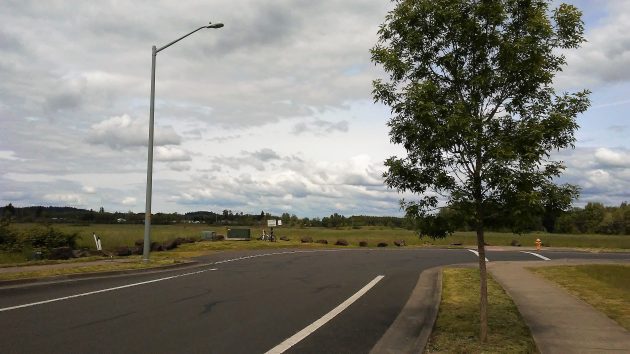 This is the east end of Somerset Drive, which is to be extended in the direction of this view.