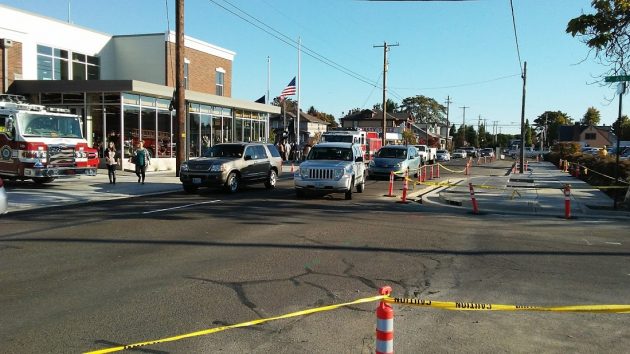 The new Lyon Street Narrows during the dedication of Albany;s new Fire Station 11 on Friday.

I’d like to know what Albany’s streetscape designers were thinking when they decided to put chokepoints on the the main downtown thoroughfare, already hard-pressed to handle traffic during busy parts of the day.

In front of the new downtown fire station, Lyon Street now has much wider sidewalks on both sides of the street. There is hardly any foot traffic there, so it’s hard to see what all that concrete is supposed to accomplish.

Chances are the idea was to “calm” traffic — meaning to slow it down — by narrowing the street and eliminating the extra space between traffic lanes and sidewalks. The speed limit is 25 miles an hour, though a year or two ago, ODOT wanted the city to lower it to 20 mph, which is supposed to be the standard in downtown commercial areas. It ignores the fact that because of faulty planning 50 years ago, increasing volumes of motor traffic are being forced to cut downtown Albany in half, and slowing traffic even more will just make the congestion worse.

A few weeks ago I complained that adding sidewalk bulbouts on Lyon caused the disappearance of what little space there had been for bicycle traffic. To which the response was that people on bikes should take the traffic lane. Now that the other side of the street has been partially blocked with a bulbout too, we’ll see what the reaction is when the few commuters on bikes going 10-15 miles an hour occupy the right-hand lane from Eighth Avenue all the way to the bridge.

Perhaps the narrowing of a main highway with lots of traffic is supposed to anticipate a time when motor vehicles have become obsolete and everybody gets around by other means. If that’s the thought behind this, good luck. (hh)