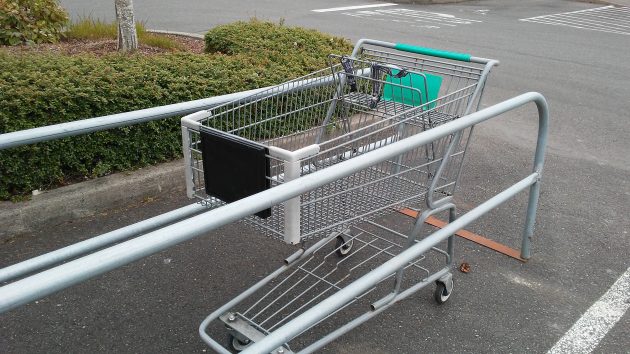 An abandoned cart sits on the parking lot of the North Albany Village center on May 1.

“Do you know if the market is going forward?” a reader asked Saturday, referring to the planned supermarket at North Albany Village. And the short answer is yes, it is.

It’s taking longer than expected, apparently. I asked my longtime contact at the Deacon Corp. how things stood. Deacon is in charge of developing the North Albany center for the New York entity that owns it.

The response I received on May 10 was that “everything is fine and on schedule. If you take your bike ride past the store, you will see we cut new doors into the space on the southwest corner to serve the outside sales area and the hardware store.” 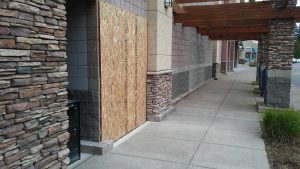 One of two new door openings for the building, as it looked on May 1.

(I had noticed the door construction before, so there was no need for a ride.)

For a few weeks now, plumbers, electricians and concrete workers have been working at the site, I was told, but almost all the work has been indoors. A few days ago I saw a crew cleaning the wooden trellis outside the building. Also, there has been some caulking of doors and windows.

The next thing will be restriping the parking lot, I understand, but that is waiting for the next round of good weather.

The work going on — mostly invisible though it may be from the outside so far — is to prepare the former Ray’s Food Store so The Myers Group, based in the Seattle area, can open a general supermarket along with an ACE hardware store in the space. As for a likely opening date, I’ve not been able to obtain one, no matter how urgently many North Albany residents want it to be soon. (hh)