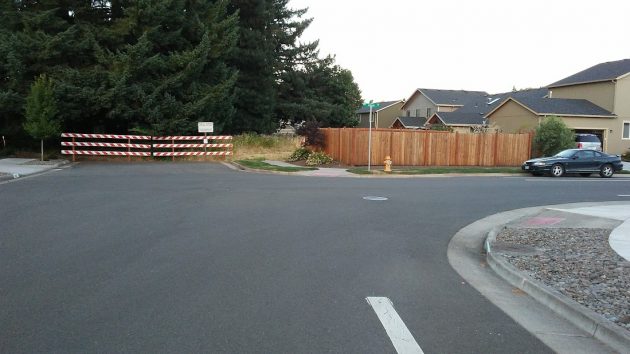 The barricade at Hickory and Adam streets marks what will be the western entry to the Hickory Hollow apartments in North Albany.

The neighbors may not like it, but the Albany Planning Commission on Monday approved the site plan for Hickory Hollow, a 48-unit apartment complex behind five single-family houses facing Hickory Street.

The project is the first apartment development in North Albany for which city approval has been sought and given. A second, larger potential development awaits action by the city council in August on a requested zone change.

In the Hickory Hollow case, the zoning allows what developer Charles Weathers, of Salem, wants to do. All he needed was city approval of his site plan, which calls for four three-story buildings with 12 units each. The planning staff approved the plan because it was deemed to meet all the requirements of the city’s development code, but a number of neighbors appealed to the planning commission.

“We would like to stop this development in our neighborhood,” said Jay Hoffmeister, of 837 Hickory  St. N.W. Barring that, he said, the neighbors wanted the two buildings closest to their houses reduced to two stories. They didn’t get that either.

The buildings at issue are in the RM or medium-density residential zone and according to the planning staff will be 35 feet tall, less than allowed. And as for compatibility with single-family homes nearby, the staff said that standard is met by setbacks, screening and landscape buffering.

Any further appeal would have to go to the Oregon Land Use Board of Appeals. But since the project fits in with the zoning and complies with the Albany development code, it’s hard to see how the board could find fault.

The vote to affirm the staff’s approval of the site and tree-felling plan was 5-1, with only Roger Phillips voting no. Joann Miller, Cordell Post, Larry Tomlin, Dala Rouse and Linsey Brown voted yes.

Weathers, the developer, is 34. He told me after the hearing he’s been building houses for 12 years and this is his first apartment venture. He got a bank to back his plan, which at this point he expects to cost $3.9 million. Excavation contractors are hard to get right now, he said, but he still hopes he might be able to start preparing the site in August. (hh)