More passenger rail: Wake up to the price 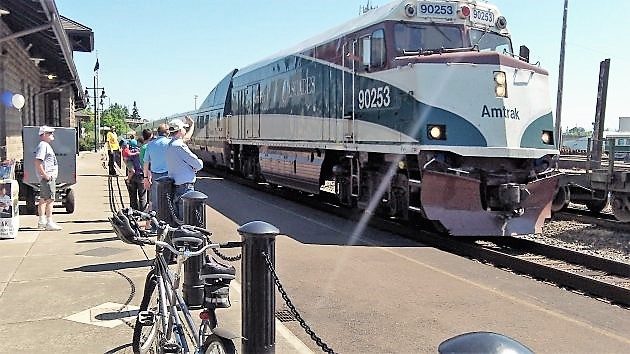 One of the trains in the Amtrak Cascades service at Albany Station in July 2016.

Nobody would blame you for having nodded off during the prolonged planning for Oregon Passenger Rail. Time to wake up, though, for now there are some startling figures at hand regarding the costs.

The planning process for improved passenger train service between Eugene and Portland, via Albany and Salem, started in 2012. Now ODOT and the Federal Railroad Administration have published the draft of an environmental impact statement.

The preferred alternative, No. 1 in the draft, would add two round trips a day on the existing route, using the Union Pacific tracks up and down the valley, and improving the track as necessary to accommodate increased passenger and freight traffic. The other alternative, No. 2, would run the passenger trains on a new track up I-5.  An option in No. 2 would include a detour to central Albany to allow continued use of the restored historic Albany Station.

As for the cost, the draft includes rough estimates in 2015 dollars.

The price for construction plus new trains and track overhauls would be roughly $1 billion for using the existing route, Alternative 1. For Alternative 2, the route along the freeway, the total estimate runs from $3.7 billion to nearly $4.5 billion.

The planners figure that freight and passenger transportation up and down the valley will increase 60 percent by 2035, and increasing passenger rail would be helpful in taking some of the load. But no matter how much we may wish otherwise, trains will never handle more than a tiny, tiny fraction of the trips. (Now the trains carry a few hundred people a day, compared with tens of thousands on on the freeway.)

Neither the feds nor the Oregon legislature are likely to throw billions of dollars into a transportation mode with so little use compared to the need. (hh)

13 responses to “More passenger rail: Wake up to the price”