Watching northbound traffic creeping along on I-5 made me wonder what’s happening with the long-standing plans for third lanes. The answer is not much, other than continued planning, which moves much slower than even the traffic on a summer Sunday afternoon.

I was crossing I-5 on the Santiam Highway overpass after a bike ride into the wilds of Linn County and stopped to record a few seconds of video of the traffic below.

Several years ago ODOT spent a good deal of time and money getting public comments and figuring out how to handle the growing traffic between and around the Santiam and Knox Butte interchanges of the freeway.

It came up with plans to add 12-foot-wide lanes in both directions between the interchanges, add a southbound on-ramp at Knox Butte, build sound walls, and make changes at interchanges to the north. All this would cost tens or hundreds of millions of dollars, and there’s no money allocated to these projects. But planning and design work continues, according to ODOT material available online.

Meanwhile, ODOT is cutting back on the elaborate and drawn-out planning process that might eventually add third lanes from Albany to south of Salem. There had been a modestly funded pursuit of this idea, but in May the Oregon Transportation Commission took $2.5 million from that effort and added it to a project to add third lanes from Kuebler Boulevard to Delaney Road in south Salem. That widening in Salem is estimated to cost about $35 million and is tentatively scheduled in 2021,

My advice: Don’t count on I-5 getting any wider soon. If you have to take the freeway north, try to go in the middle of the night when the highway is clear. (hh) 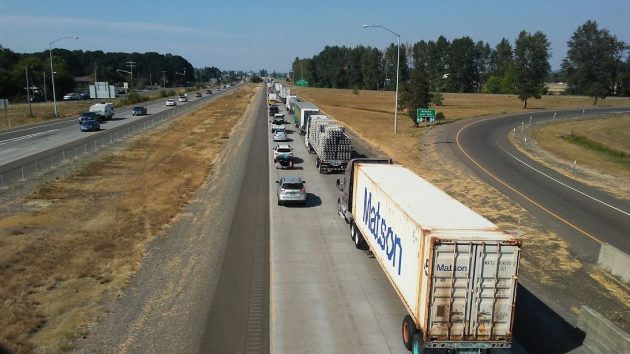 Lots of freight traffic, as you can see in this view north from the Highway 20 overpass in Albany Sunday afternoon.