More kinds of housing may be in store 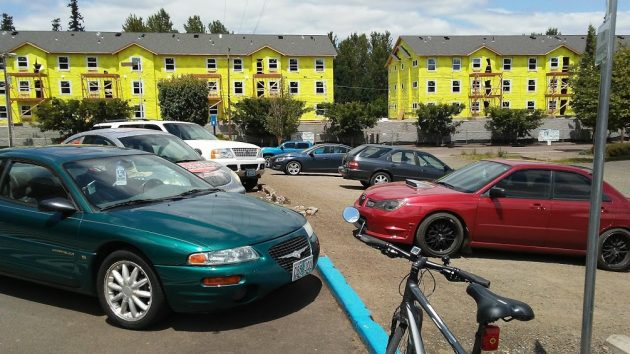 The “Sunset Village” apartments under construction in N. Albany: 40 units on 2.5 acres.

The legislature wants Albany and other Oregon cities to allow more housing, and different kinds of housing, to be built in the space available, which makes sense. But instead of easing up on Oregon’s insanely convoluted land-use laws, it has added new complications with House Bill 2001.

On Wednesday the bill was still awaiting the governor’s signature. When she signs it, it will become effective right away. And starting Jan.1, 2020, it will require cities the size of Albany to allow “middle housing” on all residential lots. Middle housing includes anything up to quadplexes, rowhouses and so-called “cottage clusters,” which are four or more detached units per acre of up to 900 square feet each arranged around a common courtyard. In England they might be called “mews.”

The bill gives cities of 25,000 or more until June 30, 2022, to change their compehensive plans and development codes. But it’s not clear whether property owners can insist on building middle housing on single-family lots before those changes are enacted. The bill fails to say. Instead, it subjects cities to the time-consuming and expensive process of changing their plans and codes.

Also not clear, at least to me, is whether middle housing can be built in the various residential subdivisions approved in the last few years but not yet built-up with single-family houses. If the developers want to change their plans now by building middle housing, do they have to go through a new approval process? You’d think legislators could have made that clear.

The bill allows cities “to regulate the siting and design of middle housing.” But the rules must not, “individually or cumulatively, discourage the development of all middle housing types permitted in the area through unreasonable costs or delay.” What’s an unreasonable cost or delay, and when is an added cost or delay reasonable? The bill doesn’t say, leaving plenty of room for arguments in court.

Albany, meanwhile, is adding housing capacity and increasing density without being told. In the last year alone, the planning division has reviewed four apartment projects with more than 400 units, the latest being the 105-unit “The Banks” development near Bowman Park. Also on the list: 147 units across the street from the new Meadow Ridge School, 64 units off Queen Avenue, and 96 units off southeast Waverly Drive.

That’s in addition to the 48 units of “Hickory Hollow” in North Albany completed last year, the 40-unit “Sunset Village” farther east on Hickory Street now being finished, and the 132 new apartments at Knox Butte Road and Timber Street.

More “middle housing,” if it happens, will be helpful to people who can’t afford a single house and don’t want an apartment. We’ll have to see whether HB 2001 actually brings it about. (hh)


11 responses to “More kinds of housing may be in store”