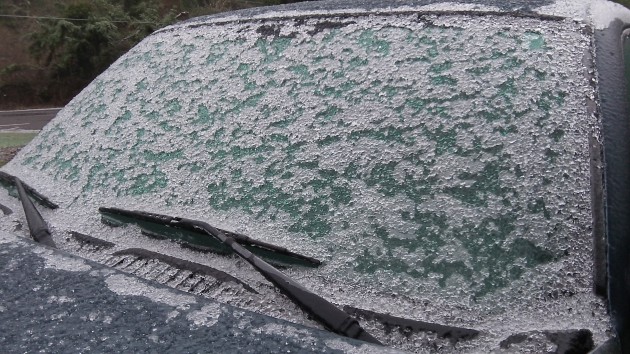 Frozen sleet on a mid-valley windshield: I obviously didn’t drive to Eastern Oregon to get a shot for this story.

On social media, someone wanted to know why the media aren’t saying “terrorists” when they talk of the people who took over buildings at the Malheur Wildlife Refuge. The answer is simple. Terrorists they’re not.

The object of terror is to terrorize the population for political ends. Terror on behalf of Algerian independence in the 1050s comes to mind. Or modern-day bombings to change American policy in Vietnam 45 years ago or in the Middle East today.

Nobody is terrorized by events in Harney County. There has been no violence, and the protagonists say they don’t want any. No one has been hurt and the public has not been inconvenienced. That’s one difference between the Malheur activists and the protesters who last year stopped traffic in cities including Corvallis, or those who dangled themselves from a Portland bridge to stop a ship.

The Malheur demonstration is doomed. The activists’ goal will not be reached. The U.S. government will not close the wildlife refuge and distribute its land to any ranchers. But the action is not without result. Because of it, more Americans now are aware of how unfair and vindictive the U.S. government can become when crossed by individual citizens. After a long history of conflict between the Hammond ranch and federal land managers, the ranch family’s father and son were convicted or setting fire to improve range land, in one case, and prevent a wildfire from destroying their ranch in the second.

But they were prosecuted under a law intended to deter domestic terrorism. The judge properly reasoned that five years in prison as required under that law was unconstitutionally harsh for two men who had no evil intent, so they served lesser terms.

But a U.S. attorney for Oregon, who has since resigned because of apparent personal problems, appealed the lower sentences, and the Ninth Circuit said they must serve the terms demanded by the anti-terror law. Now they are back in federal prison.

The Oregon Farm Bureau and many others knowledgeable about this injustice have complained. But until those activists took over an empty federal building in the snow on the other side of nowhere, the networks and national papers had never heard of or reported on the Hammond case. Now they have, and the country knows a little more about how our government sometimes acts. (hh)