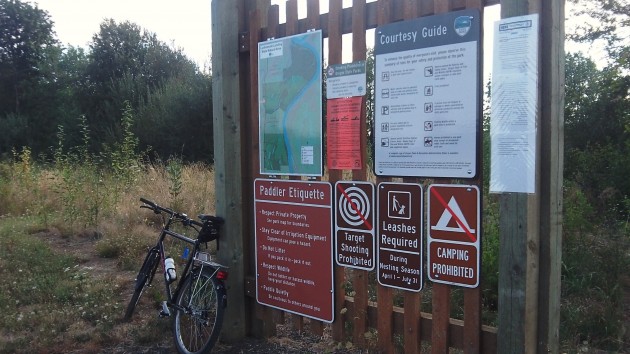 Luckiamute Paddlers’ Access: Plenty of signs, but no launch point yet.

Another snag has developed in the plans for a boating access at the Luckiamute State Natural Area. Now the launch won’t be built until next year at the earliest.

In June, I reported that plans for building the launch point, put off last year because of a delay in getting permits, were still on track for the two-month construction window on the river this September and October. Good news for paddlers, I announced. That was too optimistic.

September is getting close, and on a ride past the “Paddlers’ Access” on Buena Vista Road, I saw no sign of any activity about to start. I asked Bryan Nielsen what was up. He’s the manager for the Willamette Mission Management Unit of the state parks department. Here’s his reply by email:

“We ran into some very technical problems with the bank grades and the requirement that we seasonally remove the dock per the permits. This has created some challenges as we are trying to minimize impact to the bank and vegetation and not wanting to create an erosion issue. While at the same time OPRD (the parks department) needs to comply with the seasonal removal of the launch and have a safe way to get an 1,800-pound dock and gangway out of the river and to the top of the bank. We have had to reach outside of our agency to get some technical assistance on the engineering. This has caused yet another delay in the installation of the launch dock. As you can understand this is not what I wanted for the park.”

Can the thing still be built this fall? Nope. Nielsen says a delay this close to the work window will result in another year’s delay.

Work on the river is allowed only when it’s unlikely to affect threatened fish runs, though I doubt a small construction project on the Luckiamute would have any effect on the runs of spring chinook or winter steelhead listed as threatened in the Willamette Basin. 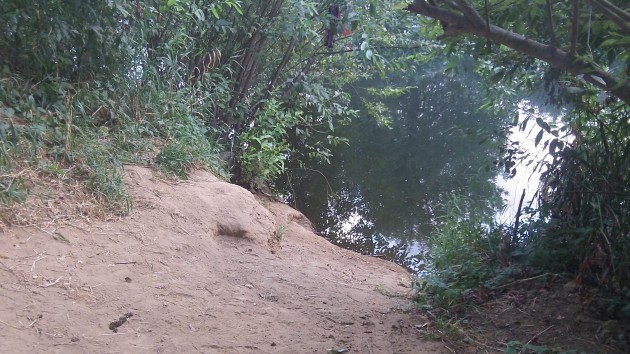 You can get a boat down there. Getting it back up is another matter.

Meanwhile, it’s not completely impossible for people with portable boats to reach the water at the planned access point. A trail has been cut through the brush. But the bank is steep and sandy, so while it would be easy to slide a canoe down the slope, without a system of ropes and pulleys you’d have a hard time getting it back out. (hh)