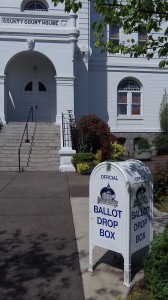 Ballot drop boxes like this in Corvallis are not exactly being overrun.

If we want more citizens to vote, we’ll have to make elections interesting. Oregon elections sometimes are, but in most respects this primary is not.

Secretary of State Kate Brown, Oregon’s chief elections officer, reported on Facebook Friday that “Gilliam County continues to lead the Voter Turnout Challenge with 35.6 percent while Multnomah County trails the rest of the state with just 13.7 percent.” And she asked: “What can we do to improve turnout? Please give me your comments.”

What can we do? Have hot issues on the statewide ballot.

Except for some local issues — Jackson’s County’s GMO ban comes to mind — we have no controversial initiatives on the ballot other than local money issues. No wonder many voters could not care less. Also, most candidates are running unopposed. The one important exception is the Republican nomination for U.S. Senate, with two main contenders and three others. But Republicans are a small minority of all registered voters, so most people with ballots can’t vote in the only interesting statewide race. That could be fixed by adopting an open primary, but the politicians and their parties opposed that reform and the voters rejected it a few years ago.

Someone answering Brown’s Facebook plea made this point. Most people, she claimed, no longer read their mail. So they might just throw away the ballots along with the junk. If that’s so and becomes widespread, voting by mail is doomed, and pretty soon people will demand to vote the way they shop and pay their bills — online.

Until that frightful day comes, let’s quit worrying about voter turnout. If there’s an exciting election, people will want to vote without being hectored. And if elections are boring, voters are right to ignore them.

Here’s another thought that should appeal to conscientious citizens who never miss an election: The fewer people vote, the more each vote counts. (hh)