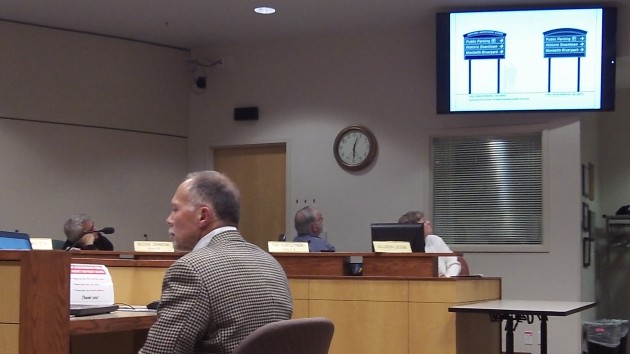 Designer Ken Ambrosini shows the CARA board what downtown signs would look like.

If people have gotten lost and turned up missing in search for the sights of downtown Albany, I’m not aware of it. But just in case, the downtown urban renewal program is going to put up “wayfinding” signs.

The advisory board of CARA, the Central Albany Revitalization Area, got a presentation on the project Wednesday from Ken Ambrosini. He owns a design firm in Portland. And he laid out plans for two main “vehicular directional” signs at the entrances to downtown at each end of the Lyon-Ellsworth couplet, four smaller signs along those two streets for drivers and pedestrians, and 18 signs for walkers on six intersections along First Avenue.

The signs would be black, dark blue and dark green, with white lettering. The two big ones would be about 12 feet tall and eight feet wide, judging by Ambrosini’s renderings, and the others slightly less tall but much smaller in size. They would be made of aluminum, in his recommendation, and point people to places such as public parking, Monteith Riverpark and the Monteith House.

Councilor Bill Coburn wanted to be sure they would also mention the Albany Carousel. Over the years points of interest could be added, as the elements of each sign would be exchangeable. There would be no logo, but Ambrosini said they would still show a “brand” for historic downtown Albany with their shape, color and typography.

Now he’ll refine the plans, and eventually CARA will call for bids for someone to make and install as many of the signs as the budget allows. The program has set aside $75,000 for the wayfinding project, which has been talked about since at least 2011 when it was recommended in a downtown plan update.

Ambrosini’s deal with CARA calls for him to be paid about $15,000 for his work, leaving about $60,000 for the actual signs. So if visitors have trouble finding the riverpark or other points downtown, their worries should be over by next year. With any luck. (hh)