Looking up: Something’s not right 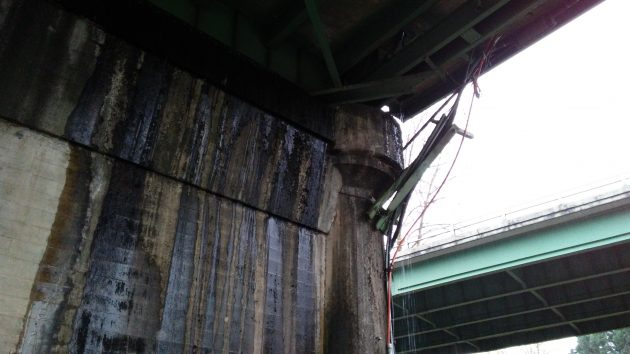 The view upward from underneath the north end of the Ellsworth Street bridge.

Wanting to take a look at the level of the Willamette River after several days of rain on Thanksgiving Day, I found myself at Takena Landing and looked up. Not a pretty sight, I would say.

As near as I can tell, there are four separate cables or conduits snaking down from underneath the bridge deck. And whatever wooden structure was supposed to protect them or help hold them up has fallen apart. It doesn’t look like any of these cables are in imminent danger of failing. But if any of them are cross-river communication lines — maybe phone or cable TV — putting that assembly to rights might be a good idea. It might prevent an interruption of service that customers would resent.

As for the river, it’s been running pretty full. But as a sign on the pole near the boat ramp helpfully points out, the water level was much higher during the last event that deserved the name flood — in February 1996. That month the river crested at slightly more than 30 feet on the Albany gauge (compared to 11.4 feet Sunday afternoon).

Now, the dams in the Willamette basin protect us from the worst kind of flooding, another reason to be grateful during this season of thanks. (hh) 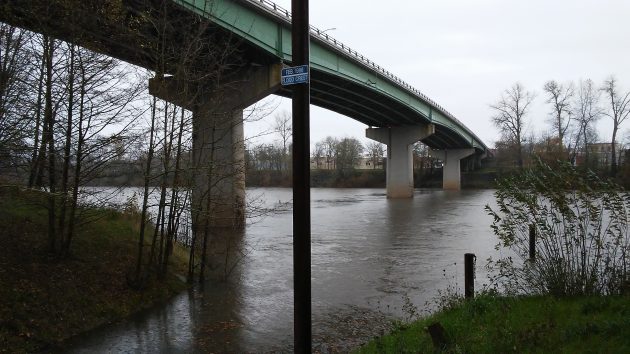 That small blue sign marks the crest of flooding in February 1996.


4 responses to “Looking up: Something’s not right”