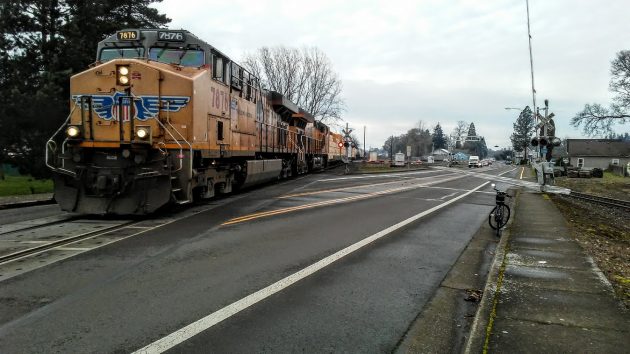 For most of its history Albany has been a railroad town, and I like it that way. For drivers this comes with the occasional inconvenience of long waits at grade crossings, as happened Thursday.

So what happened Thursday? A mile-long freight train sat on the Union Pacific mainline for more than half an hour, blocking crossings from Salem Avenue south.

I was on a bike ride in town around mid-day and could not help noticing the long lines of cars and trucks — and at least one city bus — waiting for the crossing gates to lift on Main Street, and then Santiam Road and Salem Avenue.

Just before noon a couple of guys — one on foot, the other pushing a bike — had given up waiting for the gates to go up. They sat down on the curb off the Main Street crossing to have lunch. They told me the train had sat there about 10 minutes. And according to them, the train had been going back and forth a bit, so maybe it was picking up or dropping off cars in the Albany yard.

A few minutes later, I found the two locomotives sitting still on the Salem Avenue crossing, making their customary noises, as you can see and hear in the two-minute video here:

It was 12:30 when I stopped at Albany Station, 1.2 miles from Salem Avenue as the crow flies, where the tail end of the train was still sitting on the track that would soon be needed by the southbound Coast Starlight.

Just then the freight cars there started moving, heading north and gaining speed. The Starlight was late, so the timing didn’t matter that much. But it was nice to know that all those drivers in line on Albany streets, drumming impatiently on their wheels, would soon be able to move. (hh)