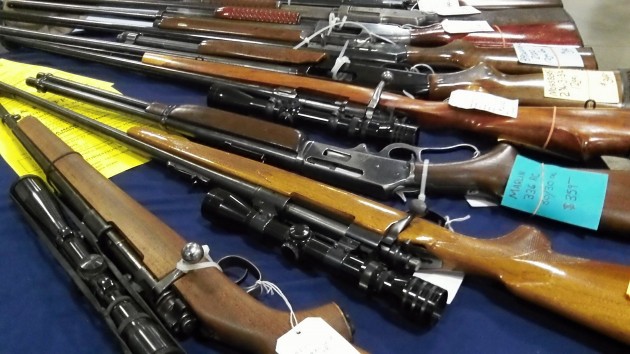 Rifles on display at an Albany gun show in March 2014.

Not that it’s a big surprise, but the three Linn County commissioners have gone on record supporting the right of law-abiding people to keep and bear arms as the Second Amendment guarantees. Commissioners Roger Nyquist, John Lindsey and Will Tucker signed a resolution to that effect on Tuesday.

In response to my question as to what brought this on, Nyquist responded by email Tuesday night: “The Linn County Board of Commissioners has received several requests from residents in the last few weeks asking that we pass a resolution supporting their Second Smendment rights. They generally have concern that the Oregon Legislature is going to pass a bill that violates those Second Amendment rights. Today we did as our constituents requested. We think it is always a good idea for legislative bodies at all levels to follow the Constitution.”

Among other things, the commissioners say they oppose any state or federal law contrary to the state or federal constitutional provisions preserving the people’s right to keep and bear arms. They also say the board “vigorously opposes” any law that unconstitutionally restricts those rights. And the resolution concludes that the board “remains committed to the removal of firearms” from those who have forfeited their rights because they have committed felonies, or from people who have been judged mentally ill and a danger to themselves and others.

The Clackamas County commissioners adopted a similar resolution on Feb 19. Before that, nine county governing boards — out of Oregon’s 36 — had done the same: Lake, Baker, Wallowa, Yamhill, Klamath, Polk, Douglas, Wheeler and Sherman. If you’re wondering whether Benton County might be next, I wouldn’t hold me breath.

At least 15 gun-related bills have been introduced in the legislature, including one adding JP and municipal courts to the places where people other than police, or presumably the judge, are barred from being armed. There a several pro-gun rights bills as well, including one that would require schools to conduct firearms-safety classes. One bill expected to pass in the Democrat-controlled legislature — expanding background checks to almost al firearms sales, in addition to those already covered — as of Tuesday had not yet appeared. (hh)