Albany’s Dave Clark Path will be much brighter at night — and presumably safer — once the city goes ahead with its plan to install new lights along the riverside trail and in Monteith Riverpark. How much brighter? Well, take a look at the video taken during a demonstration Thursday night of just how the fixtures would work.

Benton Electric, which earlier had volunteered to work out a lighting plan, temporarily put up two of the proposed fixtures designed for linear lighting on the path near the Deluxe Brewing, and then two others providing all-around area lighting in the riverpark. 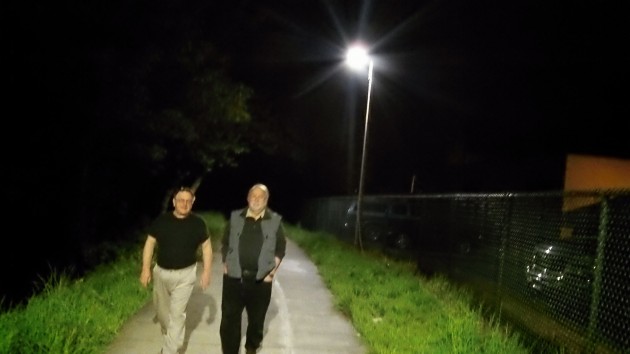 The Central Albany Revitalization Area advisory board, which includes all members of the city council, agreed on March 18 to ago ahead with the lighting project but still has to work out exactly how to carry out the procurement. That may come at the group’s meeting in May.

The poles on the path would be roughly 80 feet apart and support LED fixtures. Each fixture is rated at 138 watts, but the LED’s — about 40 in each fixture — make it look as though it could light a stadium. The light is white, said to be helpful because it lets people, including especially the police, recognize colors. The installation will replace fixtures that emit an unfocused, yellowish light.

Along most of the riverside path, there’s no lighting now. The police department suggested that proper lighting would help in enforcement, make the path safer after dark, and encourage more people to use it. That is the goal of the downtown revival program too, which is why CARA agreed to fund the lights. (hh)

5 responses to “Lighting the Dave Clark Path: A tryout”