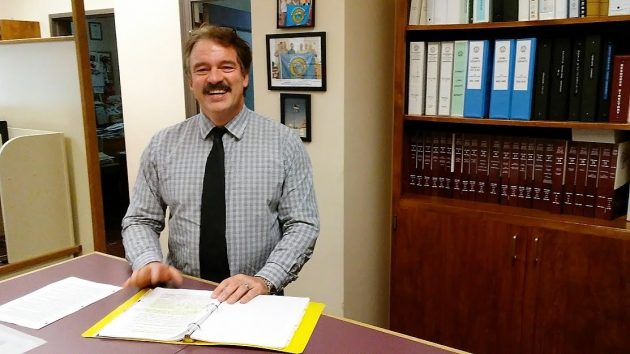 Linn County Commissioner John Lindsey may look happy, but about HB 2020, in front of him, he’s not.

John Lindsey is worried about House Bill 2020. And depending how that legislation turns out, you might be too if you’re hoping to still be alive in Oregon in about 30 years.

I ran across Commissioner Lindsey at the Linn County Courthouse Tuesday afternoon. He was reading HB 2020, the proposed Oregon Climate Action Program, and had marked up the sections that to him were of special concern.

Thus reminded, I looked up the bill and reread it on my own. HB 2020 is likely to become law because it’s a top priority of Democrats, who have super majorities in both the House and Senate.

As a law, the act will set up a Carbon Policy Office in state government. The director of that office will promulgate rules and enforce them with civil penalties. The rules will be intended to, over time, all but eliminate the emissions of carbon dioxide and other so-called greenhouse gases.

By 2035, under this program of regulation, emissions of greenhouse gases are supposed to be 45 percent below the level of 1990. And by 2050, they’re supposed to be 80 percent below 1990. According to projections by Portland State, Oregon’s population by then is likely to be closing in on 6 million, about a third higher than now. Which means that in about 30 years, in order to meet the goal of this law, the use of fossil fuel will have to just about cease.

To reach the goal, the law caps emissions at the level of the last three years, then lowers the permitted level each year. The main producers of fuel and energy would be allowed to buy, at auction, “allowances” so they could stay in business.

It’s hard to see how this cannot lead to sharp increases in the price of motor fuel, home heating, and everything produced in Oregon. But so far,  legislators don’t have answers on the costs. As for the bill’s revenue and cost impact on state government, the legislative website says “no items to display.”

One potential outcome is that voters feel the bite to such an extent that they force a future legislature to repeal the program. If not, you’re looking at a drastic change in how Oregonians may have to live 30 years from now. You may have to forget about having a job, except maybe in government, writing rules. If you still do have a job, forget about driving to and from work. You could’t afford the gas. And as for housing, you might want to move to a one-room shack with a stove that burns wood. (hh)

47 responses to “Life under state Carbon Office in 30 years?”