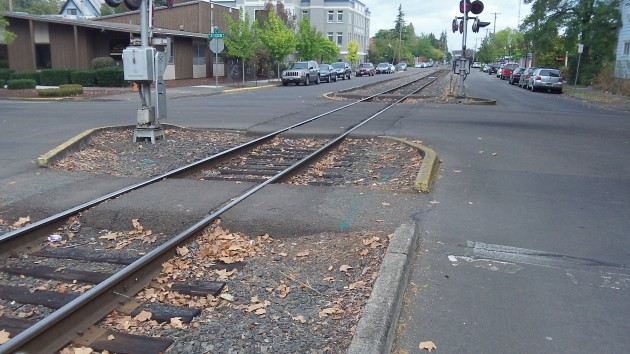 Sixth Street in Corvallis: Who you’re gonna believe, your eyes or your GPS?.

If you want to be reminded of simple rules for staying out of trouble, just take a casual glance at the summarized activity log of the Benton County Sheriff’s Office.

Rule No. 1: Ignore your GPS device whe you’re driving. Or at least, look out the windows of your car before following its commands. A little after 9 of the night of Sept. 23, deputies were called to the corner of Jefferson and Sixth streets in Corvallis, where a car was stuck on the railroad tracks. They spoke to the driver, who told them “she was an incoming OSU freshman and was trying to drive to Fred Meyer’s to get a few items. She was listening to her GPS navigation and it said to turn, so she did and high centered on the concrete curbing next to the tracks.”

Rule No. 2: Don’t forget your cell phone when navigating the Willamette River after telling people you’ll meet them at a landing at a certain time. On Sept. 14, about 10 minutes before 8 at night, deputies went to Hyak Park after getting a call that two people had gone to float down the river from Corvallis and had not turned up by evening. “Deputies arrived and spoke to the caller. Shortly after deputies arrived, the two people arrived safely.” Now they know: It always takes longer to go down the river than you think, and if people are waiting, it’s nice to be able to tell them you haven’t gotten stuck or drowned.

And Rule No 3: Don’t eat and drive. Deputies got a report on Sept. 12, that there was what looked like an impaired driver on Highway 20. The officers caught  up with him. Impaired? Well, not really. “The driver was eating a hamburger while driving, causing him to have difficulty maintaining his lane of travel.” Yes, that can happen when the ketchup or mayo oozes all over the place and you’re trying to keep it from dripping on your lap. But here’s a question for Oregon legislators: If it’s not against the law to eat while driving, why is it unlawful to talk on a phone pressed to your ear? (hh)