Think of survival after big quake 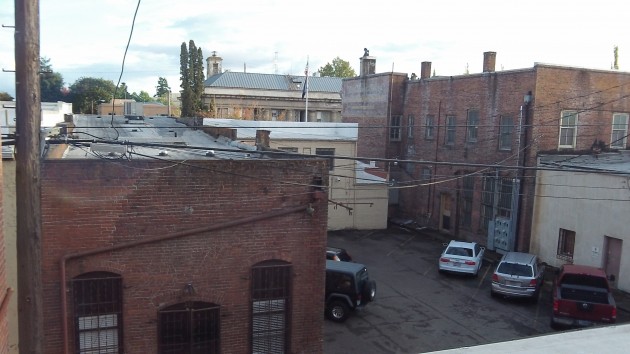 What you can see from a downtown rear window.

Looking out an upstairs window of the Flinn Block in downtown Albany last month, I was wondering how well those brick buildings out there would withstand a great big earthquake. Not that well, I suspect. And now we’ve had yet another reminder, in the form of an excellent program on Oregon Public Broadcasting, of how ill prepared our state really is if the Big One hits us in the next few years.

The OPB program, “Unprepared,” has been shown three times and will air again at 9 p.m. Oct. 18. It follows up on a report presented to the legislature in 2013. That report was titled “Oregon Resilience Plan,” and it showed that so far resilience is mostly lacking in all the systems — water, transportation, energy, health care and so forth — on which urban life depends.

The last great quake along the Cascadia Subduction Zone happened on the evening of Jan. 26, 1700. Over thousands of years such massive quakes, of 9.0 magnitude or so, have happened on average every 250-300 years. Since the last one was 315 years ago, the chances of another one pretty soon are good.

When it happens, the coast will be hit hardest, and the resulting tsunami will likely wipe out low-lying towns. The Willamette Valley will not, however, be spared. In Albany and other parts of the valley, we might have to go without electricity for one to three months. Water treatment plants and highway bridges might be out for up to a year. Motor fuel won’t be available because the Portland tank farm supplying all of Oregon sits on a site likely to turn to mush.

Hundred-year-old brick buildings downtown, in other words, won’t be our worst problem.

The Resilience Plan lays out things to be done over the next 50 years, by the private sector and the state government. You’d think local authorities would be interested too. But you don’t hear much from county commissioners or city councils about preparing to help their residents survive without customary local services for months at a time.

The reason I was upstairs in the Flinn Block ballroom on Sept. 17, and looking out the window, was a public forum where officials aired their concerns about marijuana. Maybe they’ll get around to megaquake survival next. (hh)


9 responses to “Think of survival after big quake”