Let’s hear it for bike racks 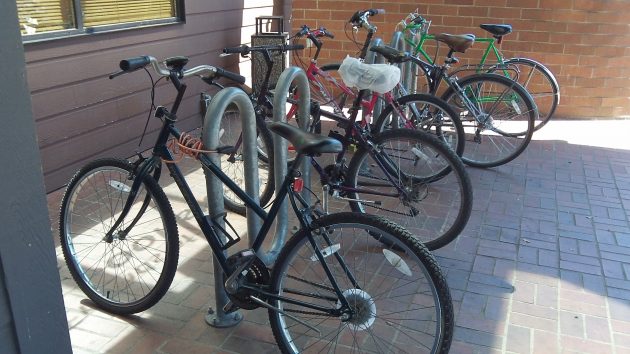 At Albany’s main public library, bike parking is no problem.

While the weather is nice, getting around town on a bicycle is easy and fun. And all the places where people on bikes usually go might want to consider whether there’s a handy place for riders to park their wheels.

I was thinking of this, briefly, a few evenings ago when we made an ice cream stop at the West Albany McDonald’s. Here, take a look: 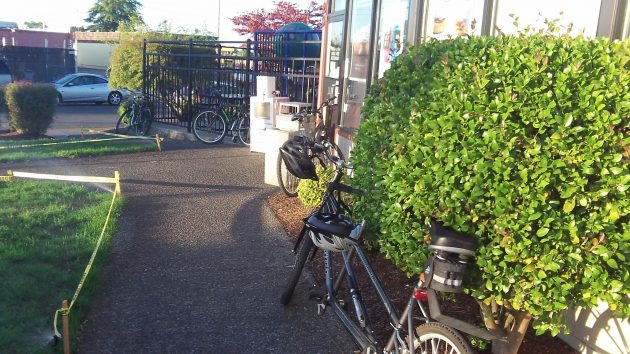 Counting our tandem, four bikes were leaning against whatever was there to lean them against. And two of them were chained to the playground fence. It works, obviously, but having a proper bike rack would probably work better, and it would keep the walkway clear.

In contrast, destinations like the Albany Public Library on 14th Avenue recognize that some of their customers are likely to arrive on two wheels, and maybe some of their staffers too. So when the library was designed — about 10 years or longer ago now — the plans included bike parking with the rest of the remodeling of what had been an office building.

People using bikes to get around won’t let the absence of bike racks stop them. We’ll just lean the bikes against the nearest wall or post. (A post works better than a wall if we want to  lock up our wheels.) But bike racks everywhere would be a nice thing to have. It would mean that business and building owners welcome bike riders as customers.

I’m talking about the modern kind of rack, the kind where you lean the bike against a steel pipe shaped like an inverted U, like at the main library and the Albany City Hall, for instance. Not the kind where you stick the wheel into a slot so that if somebody bumps into the bike, the wheel is at risk of being bent.

Coffee shops, post offices, banks, restaurants, specialty shops, office buildings — all of those and others could do the world a favor if they added modern bike racks where they don’t yet exist. The world? Well, cyclists anyway. And if more people figured they could easily park and secure their bikes, maybe we’d get more people using bikes instead of theirs cars for short trips around town. (hh)


5 responses to “Let’s hear it for bike racks”