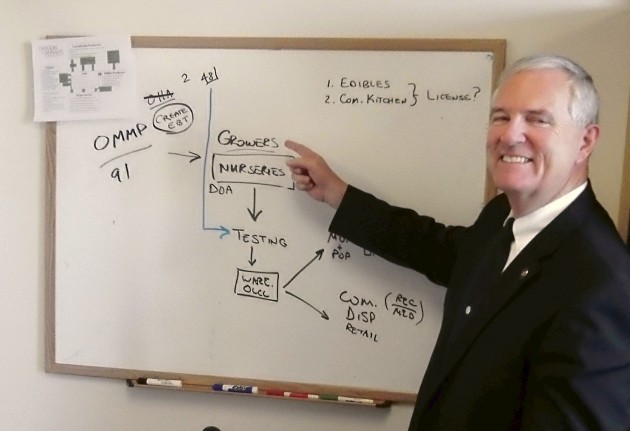 A work group of legislators has been meeting to try to straighten out Oregon’s marijuana law, but apparently it’s a tough slog. Rep. Andy Olson, R-Albany, is one of the group’s members. He hopes the lengthy discussions twice a week will result in a bill, but he doesn’t know when.

In his Capitol office Olson has a whiteboard where he diagrammed the issues. Last Tuesday the board looked relatively clean, but Olson says it used to be much more densely covered before some of the issues were at least tentatively cleared up.

One of the issues Olson is concerned about is what he calls “card stacking.” It’s the practice of some growers, especiallty in Southern Oregon, to produce far more marijuana than their patients can legitimately use, resulting in a surplus that is — most likely — sold illegally in other states.

The work group is also trying to to reconcile previous law on medical marijuana with the 2014 initiative that legalizes and attempts to tax and regulate recreational pot. The Oregon Liquor Control Commission is supposed to come up with rules by this summer, when the legalization takes effect.

Meanwhile, at least 19 separate bills on marijuana have been introduced. Two of them would outlaw marijuana outlets in wide sections of cities or towns. HB 2040 would ban any marijuana facility within one mile of a school. And HB 2041 would allow local governments to impose the same two-mile-diameter no-pot zones..

Another bill,  SB 540, would prohibit recreational and medical marijuana facilities within 1,000 feet of any child-care program. And HB 2781, would outlaw child care facilities where any person with a “regular presence” has a medical marjuana card. Oregon already bans smoking tobacco in a car where children are passengers, and HB 2854 would include marijuana smoke and nicotine vapor in that ban.

Senate Bill 445 would require medical and recreational pot providers to post notices warning that marijuana can harm pregnant women and cause birth defects. And finally, just in case the OLCC is overwhelmed, HB 2885 would give the agency another year after July to write rules regarding marijuana-containing beverages and food. (hh)