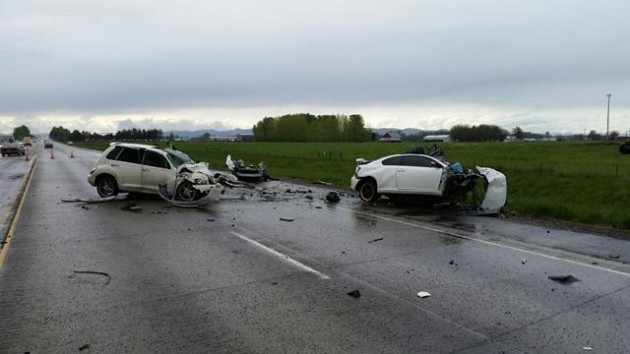 The Oregon State Police provided this view of the Friday crash scene on Highway 34.

Cables and other types of median barriers are fine and good, but what else could we try to keep drivers on their side of the road?

At the Capitol in Salem this morning (Monday, April 6) the Senate business and transportation committee may act on a bill to encourage ODOT to install median barriers between opposing lanes on most sections of interstate highways in the next six years. The sponsors, including the Senate president and House speaker, call it the “Fritz-Fairchild Act” after the State Hospital psychiatrist and the counselor who died when a pickup careened across the I-5 median in Salem last Sept. 24 and hit their car. But all the bill says is that ODOT “shall make efforts to complete installation of median barriers” before Dec. 31, 2021. ODOT is doing that already in segments where crossover crashes have happened.

Along I-5 in Linn County, the installation of a cable barrier is about complete. I only wish ODOT had acted sooner. In Linn alone, according to a newspaper report last October when there was another fatality, there were 35 crossover crashes from 2008 through 2013, resulting in four deaths and 43 injuries.

But the problem is not confined, obviously, to interstates. “Roadway departure” crashes, including crossover head-on crashes, account for about two-thirds of all traffic deaths in Oregon. Just last Friday, the state police reported that a 24-year-old man from Roseburg lost control of his eastbound car on Highway 34 south of Albany and crossed into the westbound lane, hitting another car head-on. Both he and the other driver, a 70-year-old woman from Lebanon, lost their lives and an infant in the back seat of the man’s car was injured.

We can’t expect ODOT to string cable barriers everywhere, especially on roads like Highway 34 where the travel lanes are separated not by a median strip but a left-turn lane. And of course on all two-lane roads, the only thing running down the middle is a painted line.

Staying on he right side of the highway should be easy. All we have to do is pay undivided attention and keep our speed under control when curves are coming up. The fact is that too often, we don’t take driving seriously enough. I don’t know if ODOT or the legislature can do anything about that. Maybe rumble strips down the middle of most undivided roads would help by warning drowsy or distracted drivers when they drift into the oncoming lane.

We already have lots of roadside signs — too many, in my view — but maybe we need one more. “Concentrate,” it would say. “You’ll kill someone if you don’t.” Sadly, it probably would do no more good than all the other signs we already have. (hh)