Landmarks dispute: It’s not over yet 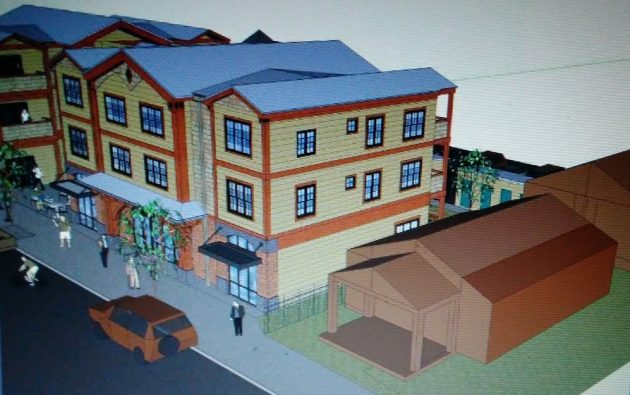 This rendition appeared on the screen as the Landmarks Commission heard the presentation of the applicants’ plan. The brown model on the right represents an existing house on Fourth Avenue.

Through occasional static, electronic echoes and screeching feedback, the Albany Landmarks Commission Wednesday heard arguments for and against plans for two buildings at Fourth and Calapooia, in the downtown commercial zone of the Monteith Historic District.

The online “GoToMeeting” proceedings lasted from 6 until 9:39 p.m., with a bathroom break at 8. And it isn’t over yet. The commission closed the hearing but kept the record open to allow for written comments until 5 p.m. May 18. If any are submitted, they’ll be considered before the panel meets again, also remotely, at 6 p.m. May 19 to deliberate and maybe decide.

Builders and Albany residents Mark and Tina Siegner and Bill Ryals, their Albany architect with years of experience in historic restoration, made their case for the two three-story buildings, with commercial spaces below and apartments above. Then they listened to a barrage of objections from critics to the size and 40-foot height of the buildings, and to the they way they would look.

Separately from the historic review, the project is also subject to a city staff review of its site plan, which has been submitted.

Part of the critics’ complaint was that the plan calls for only four off-street parking spaces. This isn’t an issue in historic review, but Planning Manager David Martineau pointed out that in the applicable zone and downtown parking district, buildings are not required to have any off-street parking at all.

Four of the six Landmarks members hearing this case voted in 2018 to reject the Siegners’ application to demolish four derelict old houses on the lot in question, a decision the council eventually overturned, twice. But the four indicated they could hear the present application without prejudice.

The Siegners questioned commission member Jolene Thomson’s participation in the present case because of what she had said about them before, but she did not recuse herself.

Judging from the tone and substance of public hearing comments, regardless of what Landmarks decides, it seems that like the demolition controversy, this one may end up before the city council on appeal.

The Albany historic districts were adopted in the 1980s. From what I remember about it, the council of 35 years ago never foresaw the red tape and trouble this would cause for someone trying to replace broken-down old ruins with a building that would combine downtown housing and commercial space in an attractive design. (hh)

6 responses to “Landmarks dispute: It’s not over yet”