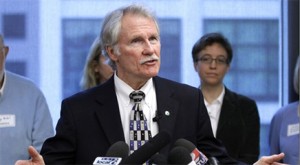 Governor Kitzhaber in a photo on his official website.

Governor Kitzhaber has worked on health care and insurance reform since the 1980s. It’s what he is known for. He’s supposed to be the expert. When he was out of office during the Kulongoski years, he gave impressive speeches on his vision of how medical costs could be curtailed and insurance coverage be provided for all. But something went haywire when the various concepts attempted to be carried out in the last two or three years.

We have a bewildering array of government and quasi-government organizations in Oregon, all with their hands in health care or insurance, in addition to the providers and the insurers and the insurance commissioner. We have the Oregon Health Authority, the Oregon Health Policy Board, the Oregon Health Plan, the Division of Oregon Medical Assistance Programs, and on the regional level we have Coordinated Care Organizations. Now, on top of all that, we have Cover Oregon, a public corporation responsible to a board appointed by the governor. So even a policy wonk like Kitzhaber might have lost sight of all the intersecting lines of responsibility.

Maybe that accounts for the expensive failure so far of Cover Oregon to function as intended in signing people up for insurance online, and for Kitzhaber’s failure to prevent that debacle. The governor says he had been led to believe the Cover Oregon program would work. But how come he believed this when the news was full of reports that it wasn’t working? He doesn’t know.

According to the Associated Press, Kitzhaber said on Jan. 30 he won’t know who misled him about the Cover Oregon website and what went wrong until he hears back from a technology firm he has hired for $228,000. This is bad. Our governor is helpless to remember — or to root around among his own advisers to find out — who told him that everything was going great? Not even the ludicrous “Long Live Oregonians” ad campaign, intended to raise awareness of the Cover Oregon program, gave him a clue that nincompoops were running the ship?

Governors are supposed to be the people in government who make things happen. Ours doesn’t, though. Not in this case anyway. (hh)