Kids and a little wild space 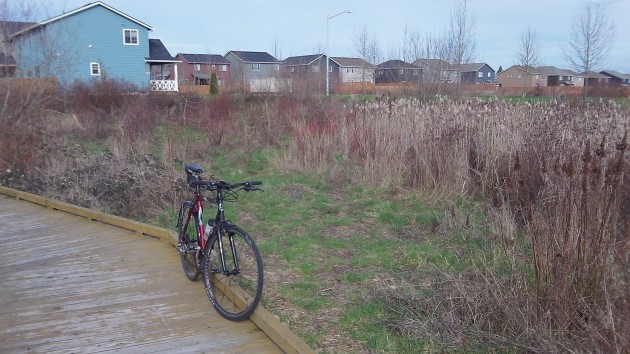 Open space in the Benton Woods development of North Albany.

If we don’t want children to sit in front of screens or game consoles all the time when they’re not in school, we ought to make sure the world outside the front door is interesting enough to play in or explore. And we should be grateful if otherwise densely packed subdivisions include a little wild or open space that allows this.

I got to thinking about this the other day after reading an exchange of views on the website for homeowners in the sprawling Benton Woods subdivision of North Albany. What about the undeveloped areas or wetlands, people were wondering. Should children be allowed to play there, or should those areas be off limits? Some residents had seen trash apparently left over from kids’ activities, and they worried that this little patch of nature might be spoiled by careless use. (I’m paraphrasing here, but this was what I remember as the tenor of the concern.)

I don’t live there, and I’m not a kid (in case anybody hadn’t noticed). But I can see where children might be tempted to wander around those open spaces, at least the parts that aren’t too swampy or covered with standing water. (And even those, actually.) They could just want to see what was there, or they could pretend they were out in the middle of a jungle on some expedition.

It is customary for old folks like me to fret about the young, especially now that there are so many digital devices that keep children sitting and looking at screens, either to play games or communicate with friends, or even to learn something or do their homework.

So if there’s a nearby patch of nature that has a chance of causing kids to step outside and let their imaginations go, unless things get out of hand it would be a mistake to put up signs that say “No playing here.” (hh)


9 responses to “Kids and a little wild space”