It may look bad, but don’t worry

Written May 23rd, 2014 by Hasso Hering
Comments: no responses. 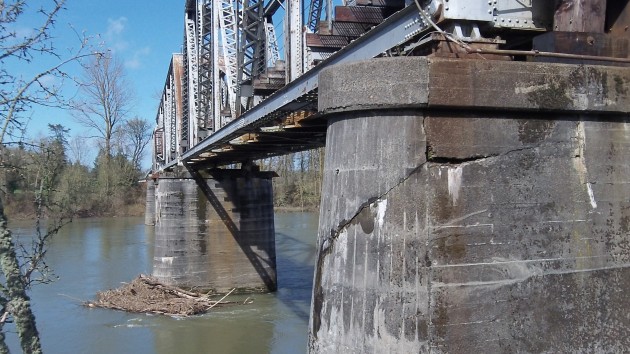 Well, that big crack in Pier 1 of the Willamette River railroad bridge in Albany is one less thing we have to worry about. It looked ominous to me when I published this photo in March. But an independent engineer has told the Portland & Western Railroad and its parent company that the pier is OK.

Back in March, I asked ODOT rail planner Bob Melbo if the appearance of this concrete pier, the one closest to the south riverbank and the Dave Clark Path, was of any concern. He checked and found a bridge inspection report from 1946 that mentioned the crack, so it obviously had been there for a long time. Still, he asked the railroad to let ODOT know what its personnel thought about this.

Today he had a response from Marc Bader, vice president for maintenance at Genesee and Wyoming Inc., the railroad’s parent company. Bader wrote that the bridge is inspected every year by an outside engineer. He included what presumably is the latest report by RailStar Engineering.

The engineer said the firm “hammer-sounded the concrete in the bearing areas and found it sound.” Conclusion: “It is RailStar Engineering’s opinion that the Pier 1 of the subject bridge is in generally good condition at the present time.” 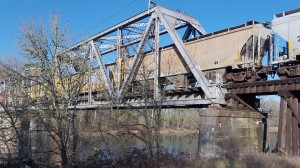 The report’s author said RailStar “strives to assist railroads to spend their maintenance money where it will derive the most benefit.”

“As a registered professional engineer in the state of Oregon, it is my duty to do so, and to protect the public from risk. Keeping that in mind, I feel the most responsible course of action is to continue to inspect this bridge, along with Pier No. 1, annually and watch for movement. Limited maintenance money would be best directed elsewhere.”

This bridge bears a construction date of 1921. In seven years it will be a century old. Looks like it will last that long and even longer, and that is good to know. (hh)