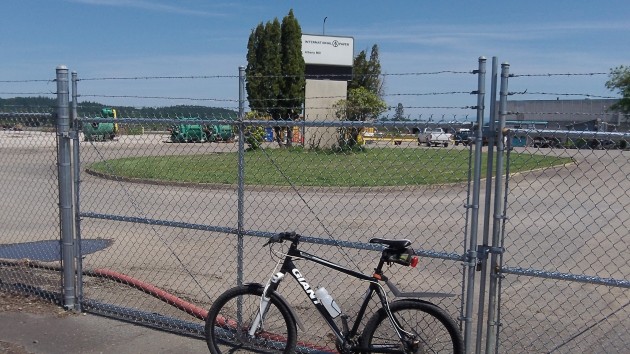 The name of the place and surrounding lawn are still in fine shape.

Not much is left of the Albany Paper Mill in Millersburg except for an exhaust stack and piles of metallic debris. But the name at the former entrance off Old Salem Road remains, and it’s surrounded by a patch of well tended lawn. It’s as though somebody wants to keep our memory of the mill alive for as long as he can.

A reader recently wondered why cars parked at the site had plates from South Carolina, and I assumed their owners worked for a demolition contractor based in the South. (When I stopped there on a bike ride last week, two cars were from South Carolina and one each was from Florida and Texas.)

When I inquired by email with the on-site supervisor, I was shunted to the chief spokesman for International Paper in Memphis, Tenn. That’s Thomas J. Ryan, who responded, also by email. He declined to say anything about who was contracted to do the demolition. But he wrote: “What I can tell you is the following.  We will be finishing up the demolition associated with the property this July.  The property then should be ready to go on the market for sale this summer.” 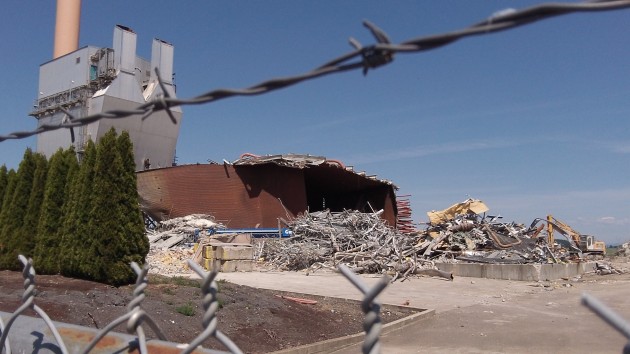 Piles of metal and the remaining structures.

The state-of-the-art mill, which made linerboard paper from sawdust and recycled cardboard, had been owned in turn by Western Kraft, Willamette Industries and Weyerhaeuser before it passed into the hands of International Paper. It was closed at the end of 2009, with the loss of 270 jobs.

In January 2012, the Albany Democrat-Herald ran a story saying demolition was about to start and should be finished in “early 2013.” The story named Frontier Industrial as the contractor, and that company, which does large-scale demolitions all over the country, may still be in charge.

The 2012 story, by the way, said the mill’s cogeneration plant would not be demolished. But it is now gone. All that remains is the system of pipes crossing high above Old Salem Road. When and if that is taken down, a permit from the Linn County Road Department will be required, according to Roadmaster Darrin Lane. No permit had been applied for as of last week. (hh)