Iowa: Too much hoopla and weight! – Hasso Hering

Iowa: Too much hoopla and weight! 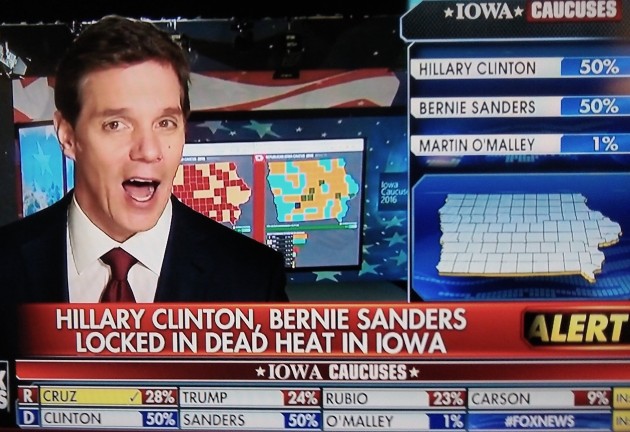 Excitement on the screen: Is it really warranted?

Look, I’m sure there are a lot of nice people in Iowa, and many of them probably also know what they are doing most of the time. But am I the only one who is not all that impressed with the outcomes of the Democratic and Republican caucuses there on Monday?

Why do the media and especially the cable channels treat this event like the Second Coming, spending months building it up and then devoting all of Monday night to the results? Is it really that important what a segment of Iowans prefer?

The results had Cruz, Trump and Rubio leading the Republican contenders in that order, and Clinton and Sanders pretty much in a dead heat on the other side. So these are supposed to be the best people we have in the running for president?

Others who are better qualified finished far out of the running. They include Kasich, Bush and Christie, present or former governors of states with many of the challenges facing the country as a whole. But their experience got them nothing.

Instead, the caucus attenders in Iowa went for the speech makers. The two senators, especially Rubio, say many right things, but have they ever had to do any governing on a big scale? And Trump? Not only has he never tried to preside over an unruly government representing lots of different people. But then he trumpets wild statements that get him heard, especially on television, which likes celebrities, but are so unmoored from reality they can’t possibly be carried out.

Too bad the Oregon primary in May comes too late to do any good in the presidential race. We ought to think about holding it in January in presidential election years. Then we would get to see and hear the candidates in person, and the outcome would be determined by an actual counting of secret ballots.

The Iowa caucus process — not even a regular election — rewards the shouters and posers. By giving the outcome so much weight, we don’t do our country any good. (hh)

7 responses to “Iowa: Too much hoopla and weight!”