In pot campaign cash, no contest 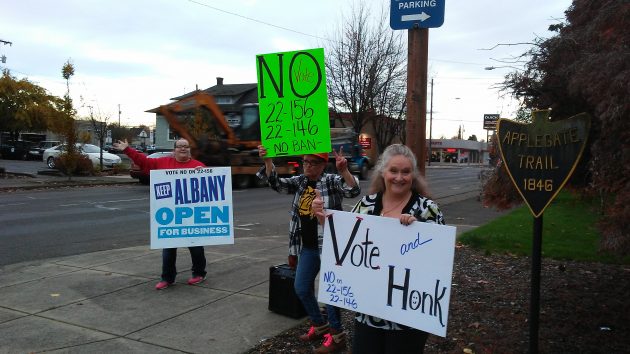 Campaigners against the Albany and Linn County bans on recreational pot commerce whoop it up at Ellsworth and Fourth Wednesday afternoon.

The campaign committee against Albany Ballot Measure 22-156 has collected more than $67,000 in cash, almost all of it from the same marijuana entrepreneur who has companies in Boulder, Colo. On the other side, until recently there was no campaign committee in favor of the measure. But on  Oct. 24, Albany Mayor Sharon Konopa reactivated a long-standing committee she heads as treasurer. Its purpose used to be backing tax levies to support the police and fire departments. Now it supports Measure 22-156, the city council’s ban on the growing, processing, wholesaling or retailing of recreational marijuana within the city. As of Wednesday, Konopa’s committee listed only some in-kind campaign work from her. Its contributions and cash balance so far? Zero.

So in the campaign finance derby, the pro-marijuana side is leading the other side by about 67,000 to nil. And on Wednesday it still had a balance of $24,000-plus.

A council member asked me Wednesday how I thought the Nov. 8 vote on continuing the Albany ban on recreational marijuana stores would come out. Based on the Albany vote on statewide Ballot Measure 91 in 2014, my guess is that the ban will be overturned. But I don’t think the money being spent for the cause (including a couple of recent $1,000 contributions from individuals in Corvallis and Wilsonville) has much to do with it. Instead, I think the proportion of tradition-minded voters in town has been shrinking in comparison to those for whom recreational marijuana use is no big deal.

Most of the pro-pot committee’s cash has gone to Washington, D.C., and Portland firms for services including mailings and polling. Maybe these efforts make a difference. But I don’t know. Seems like agitation by pot supporters on Facebook can be had at hardly any cost at all. And you don’t have to spend money to make up some signs and wave them at afternoon traffic outside the courthouse at Ellsworth and Fourth. (hh)

10 responses to “In pot campaign cash, no contest”