In NA, a country lane’s upgrade 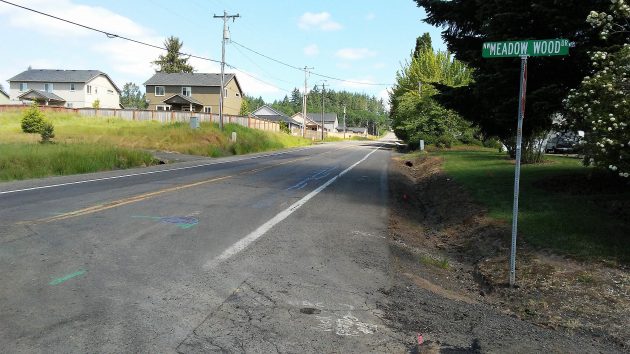 This end of Crocker Lane, empty at mid-morning Thursday, will be transformed into a city street this summer.

The price has gone up, but owners in the North Creek Subdivision still won’t have to pay for turning part of Crocker Lane in North Albany from a county road into a city street.

Years ago, the prospective developer of North Creek had signed waivers obligating future homeowners to pay if and when Crocker was improved. When this came up in 2015, 58 homeowners found themselves facing unexpected future assessments of several thousand dollars each. But the city public works staff worked out an agreement for a “local improvement district” that reduced their obligations to zero.

At the time, the Crocker project was estimated to cost under $1.3 million. By this year, the city engineers’ estimate had risen to $1.6 million. And this week, the Albany City Council awarded a construction contract to Carter & Company of Salem, the low bidder, in the amount of $1,861,694. There were three other bidders. Total estimated project costs (including design, inspection, contingencies and so forth) now total $2.1 million.

The local improvement district approved in April 2015 provided for the project costs to be shared by Hayden Homes, which built houses in North Creek; Myles Breadner, the developer of a new subdivision to the north; Benton County, and the city. (Breadner also donated about 10 wooded acres of his property to Benton County, which is managing it as a natural area.) What about the now higher cost? Says Jeff Blaine, public works director for engineering: “Establishment of the LID was based on the city covering any overruns. That is still the plan.”

The road project calls for reconstruction of about 2,100 feet of Crocker Lane from Valley View Drive to Meadow Wood Drive, including curbs, sidewalks and storm drains, along with a new water main of the same length. The contractor and city staff will meet next week, and construction activity is expected to start the middle of June.

When you look at this tranquil country road, complete with wide shoulders and roadside ditches to handle runoff, you wonder why it’s necessary to turn it into a city street at great expense. But then again, planners and engineers look at this from a different angle and with the future in mind. (hh)


10 responses to “In NA, a country lane’s upgrade”