In Albany, a new street of lights 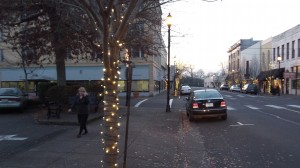 As you can see in this video, the downtown segment of Albany’s First Avenue now has new nighttime lighting. Strings of what look like Christmas tree lights have been wound around the trunks of the street trees there and strung partway into the crowns as well. At dusk Monday, the effect was not quite as dramatic as it likely was when it was fully dark.

In October the Albany Downtown Association won approval from the advisory board of the Central Albany Revitalization Area to spend $3,750 of CARA funds in the tree lighting. But as it turned out, the downtown group paid for the lights with money it had previously been allocated from the city’s tax on hotel rooms.

Some 60 trees along First were to be equipped with the strings of lights, and the plan calls for them to be lighted at night from November through March. There are a couple of lighted trees on Second Avenue as well, but most of Second downtown was not included because there are no power outlets in the sidewalk. First was equipped with outlets during the first “streetscape” project of CARA about 10 years ago. (hh)


One response to “In Albany, a new street of lights”