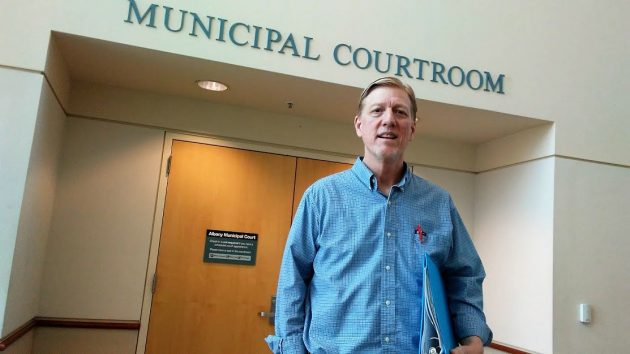 Johnny Scot Van Ras after his day in city court on Monday.

In Albany Municipal Court on Monday, Johnny Scot Van Ras made his case against the 20 mph speed zone on Waverly Drive on the east side of the athletic fields of South Albany High School.

His argument was that the school zone on the 40-mph arterial street wasn’t properly established because of two shortcomings: Contrary to ODOT guidelines, the Waverly zone has no signs showing where it ends, and no engineering study was ever done to justify it.

Judge Robert T. Scott told him ODOT guidance was not the same as the law, in the same way that the DMV driver’s manual is not the law on driving itself. The judge took the case under advisement and told Van Pas and Albany Police Officer Steve Corder he would issue his decision in a letter, probably within a week.

Van Ras, 62, a retired paper mill worker, did not dispute the facts of the $165 ticket Corder wrote him for driving north at 39 mph in the zone at 9:15 a.m. last Oct. 11. He told the judge that when he saw the officer sprinting for his patrol car, he pulled around the corner and stopped so the officer wouldn’t have to chase after him. (There’s no parking on Waverly itself.)

The school speed zone is in effect from 7 to 5 “on school days.” Van Ras got the ticket on a Thursday. The next day 39 mph would have been legal because there was no school that Friday.

Meanwhile, city transportation systems analyst Ron Irish has completed an engineering study on the Waverly zone. He studied traffic counts and accident statistics and recommended that the zone be shortened from 1,200 feet to 400 feet — 200 feet on either side of a signalized crosswalk on Waverly at 36th Avenue. Irish recommended against changing the zone to being in effect only “when lights flash” because of the cost of installing ($25,000 for that alone) and maintaining the lights.

The study is included with the agenda of the city’s Traffic Safety Commission meeting on Feb. 4. You can read it there. (hh)

That meeting of the Albany traffic panel has been called off because there was the prospect of no quorum on the 4th. It has been rescheduled for 10 a.m. Feb. 18 at City Hall. The story has been edited to correct the spelling of Van Ras.