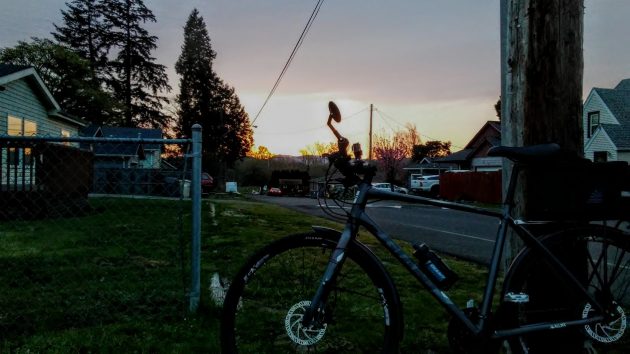 Taking a photo break in southwest Albany during a ride at sunset on April 1.

If you ride a bicycle in the Albany area, here’s your chance to talk about it with someone who cares. Well, not necessarily “talk” but answer questions in an online survey.

The Albany Area Metropolitan Planning Organization is working on a bicycle and pedestrian plan, and if you have any ideas about that, they want to get you involved. You can start by opening a website here and go from there.

The MPO, formed several years ago after Albany topped the 50,000 population threshold in the 2010 Census, deals with transportation issues in Albany, Millersburg, Jefferson and Tangent. The bike has taken me to all of them, though lately I’ve stayed more or less in and around Albany.

My first reaction was: Why a bike plan? We have roads and streets that someone on a bike can use to get anywhere he wants to go. The trouble is that, apparently, lots of people say they would use a bike to get around but don’t feel safe, so they don’t.

If something could be done about this, that would be a big deal. Imagine how much less we would have to spend on transportation — fuel, insurance, new vehicles every few years, and soon electric cars, not to mention parking and all that pavement — if at least a few of our daily trips could be done on two pedal-powered wheels. Or on E-bikes.

Albany has done a good job providing bike lanes on all the major streets (as the video below illustrates), and on side streets we don’t need them. Still, some trips are more easily made by car, especially if they involve shopping. Or if the weather threatens. Or if you don’t have much time and the distance is too great. Or your legs hurt.

I’m not sure what a metropolitan area bike and pedestrian plan can do. But take part in this planning effort anyway and give them your ideas. And if you do want to talk, the person in charge of this project is the MPOs’ Catherine Rohan. Her email contact is on this section of the bike plan’s online page. (hh)


4 responses to “Ideas for better biking? Tell the MPO”