Hyak Park gets a new restroom 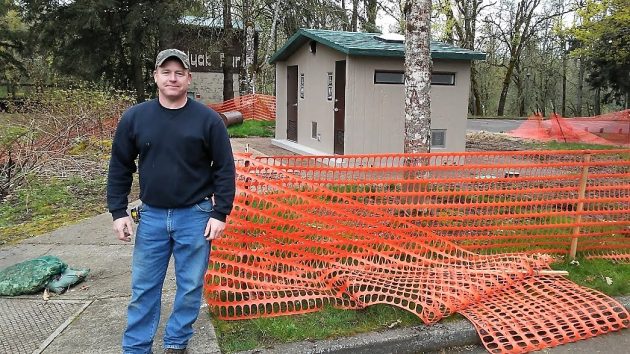 Benton County’s Hyak Park on the Willamette River reopened to the public Wednesday after being closed while workers were installing a small new restroom building.

I noticed the “park closed” barriers while driving past on Tuesday. When I went by on Wednesday to check what was going on, park ranger Shane Galloway and lead park ranger Bruce Baillie of the county parks department were just taking down the barriers and the sign.

Thanks to a grant from the Oregon State Marine Board that paid half the cost, the county was able to install a new restroom building at the popular park. The old one, in Baillie’s words, was worn out.

The work was more complicated than usual because according to FEMA, the federal emergency agency, the floodplain of the Willamette reaches as high as 4 and a half feet up the walls of the restroom.

The biggest flood in recent years, in January 1996, didn’t come close to that level. But because of what it says on FEMA maps, the Hyak restroom had to be built accordingly. The electrical panel is high up on the wall in order to remain above the maximum expected flood level. The plumbing, too, had to be done in a special way.

Laurie Starha, director of Benton County Natural Areas & Parks, told me the Marine Board grant to replace the old restroom was for $53,000. Construction started March 5 and will continue until the end of May.

Galloway told me that the Marine Board was great to work with and deserves much credit for this improvement at the riverside park. The park is a popular designation for canoe trips down the river from Corvallis, and an easy launching spot for voyages downstream toward Albany’s Takena and Bowman parks and beyond.

The men on the site told me the park was closed temporarily because of all the equipment that had been working at the construction site. Big equipment was gone on Wednesday, but the work on the new facilities clearly had a way to go before the job was complete. (hh)


4 responses to “Hyak Park gets a new restroom”