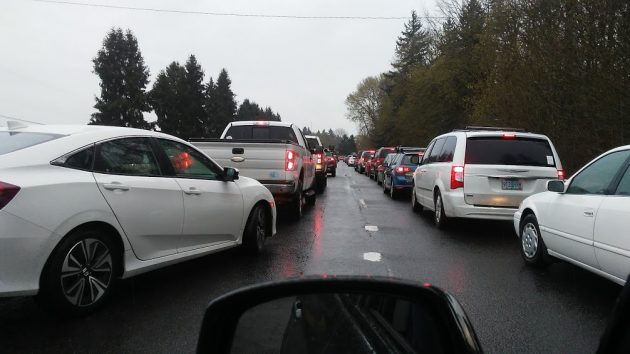 Looking east on Highway 20 from N. Albany Road shortly after 6 p.m. on April 1.

Around 6 last Monday night, because of an accident on the Ellsworth Street Bridge, it took half an hour for a car to move 2,200 feet from North Albany Road at Hickory to the signal on Highway 20 and Spring Hill. On Thursday it took a long time too, even though both lanes on the bridge were open.

Evening backups at the Highway 20 bridges in Albany are nothing new but are getting more and more routine. Which is why Albany, Adair Village, Millersburg, Benton County, and Linn-Benton Community College are pushing for a regional study “to evaluate capacity improvement options for Highway 20 and its crossings of the Willamette River.”

ODOT has not wanted to launch such a study because of the perennial shortage of money for enlarging highway capacity, according to the local jurisdictions. So in a letter dated March 26, they appealed for “support and assistance” from the Albany and Corvallis metropolitan planning organizations. The MPOs have some authority in allocating state and federal highway funds.

“The Highway 20 bridges over the Willamette River in Albany are becoming increasingly congested and no longer meet the performance standards contained in the Oregon Highway Plan,” the letter says. “Drivers routinely experience significant peak-hour delays when using the bridges, and virtually any type of ‘incident’ on or near the bridges results in gridlock and queuing that can back up traffic for miles.”

This week we saw examples of this, as though they were needed.

The bridges were built in 1925 (Ellsworth) and 1973 (Lyon Street). The letter says they are at or near capacity because of growth in the area over the last 90 years. Even now, 200 houses are being built in Adair Village, and 880 additional houses are proposed there. Similar growth has happened in North Albany since the formerly rural district was annexed to Albany in 1991.

It’s not clear what an ODOT study could possibly come up with, short of the often-envisioned but never seriously considered idea of a new bridge across the Willamette at Millersburg, connecting there with I-5. Aside from the astronomical costs of such a project, the new roads feeding the new bridge would have to cut through miles of farmland and new subdivisions. The legal and political fights would take decades before eventually running into the ground, as recently happened in Salem and Portland.

The bridges in Albany can’t be expanded or relocated without wiping out a chunk of Albany’s historic districts. So forget that idea.

One solution, seems to me, is to look at the cause, not the symptom. The cause is population growth as a result of land-use decisions taken without regard to long-term impacts on traffic or anything else. If, for example, Adair or North Albany drivers are already clogging the highway system, why would a sensible town encourage or allow the building of another 1,000 houses?

It may not seem that way to us when we’re stuck in gridlock, but for about 18 or 20 hours of each day, the Albany-Corvallis Highway and its bridges have all the capacity that anybody needs.

Before we pressure ODOT to spend vast sums on highway expansion, maybe we should quit making the problem worse by building houses where they don’t belong. And then we could decide not to drive back and forth so much. Or to time our driving when the roads are clear. (hh)

The video below: Crossing the Ellsworth Street bridge after Monday night’s accident site was cleared.