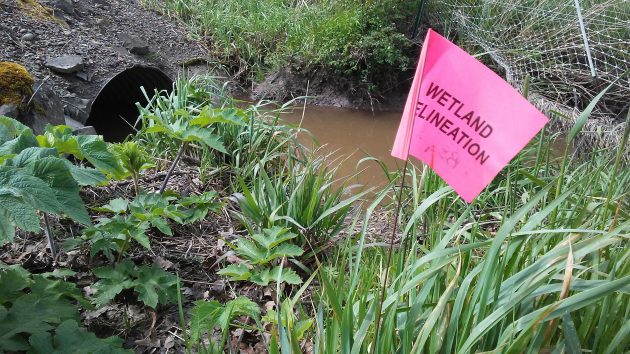 Here’s an example of how Oregon’s effort to protect so-called wetlands goes too far and requires the spending of public money without accomplishing any actual wetland protection. I came across it on a bike ride on Riverside Drive just outside of Albany.

What I noticed were little pink flags on wires stuck in the ditch on the northwest side of Riverside. The flags denote an effort at “wetland delineation,” identifying wetlands that come under state protection as waters of the state.

Linn County is preparing to widen Riverside Drive, and widening implies moving the roadside ditch a few feet to the side. The old ditch would be covered and a new one created. It’s hard to see how this amounts to a big deal in connection with wetlands generally.

The state requires a permit to remove or fill any wetlands. Amazingly, according to the Department of State Lands, this applies to “artificial ponds and ditches” as well as to what we would normally associate with the term wetlands — low-lying areas where water has created an environment important for plants and wildlife as well as flood control.

The state also requires that when wetlands are filled, the loss has to be mitigated, meaning that an equal amount has to be created or preserved elsewhere. This can be accomplished by buying credits in so-called wetlands banks.

In the case of Linn County’s plans for Riverside Drive, Roadmaster Darrin Lane told me earlier that the county expects to have to spend more than $124,000 for wetland mitigation. To move a roadside ditch.

We can dream of a day when reasonable state laws — like the law to protect the waters of the state — will be administered with reason in mind. But as those little flags show, that day is not in sight. (hh) 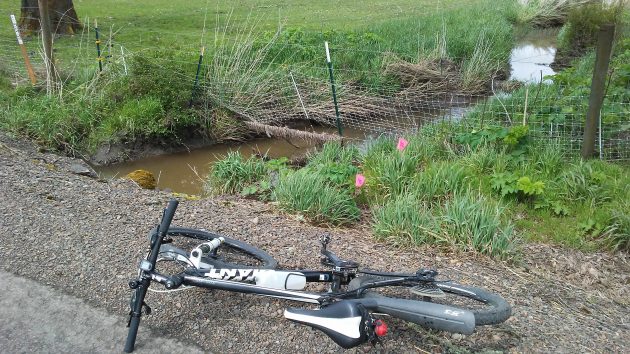 I got off the bike down to take a closer look at those little flags.