How this dumb law works: Check it out 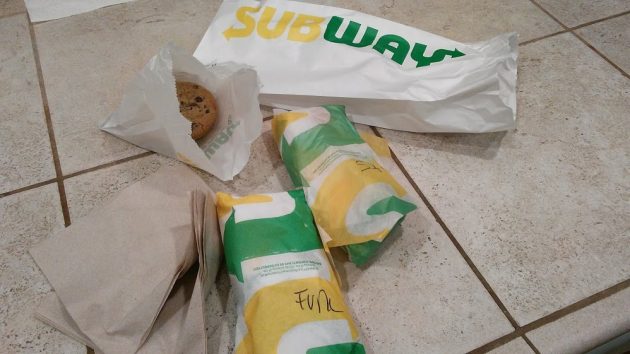 Lots of paper with this meal, but only the bag at the top costs a nickel.

Just how stupid is Oregon’s new law on checkout bags? You get the idea when you want to take home a little meal from a sandwich shop, the North Albany Subway in this case.

There are lots of wrappings involved. Lots of paper, as any loyal Subway customer knows.

If you want some cookies, the little bag they put them in is free, at least in the sense that there is no extra charge.

They throw in a handful of paper napkins. Free. Thank you very much.

But unless you want to stuff the sandwiches, cookies and napkins in your pockets, one more wrapping is required.

A little bag. And to put all those items in a little paper bag, Democrats in the Oregon legislature insisted that the sandwich maker demand five cents.

At Subway, they used to stuff your sandwiches in a handy plastic bag so you could put them in the car without worrying about the sauces or the oil leaking into the floor mats. That’s forbidden now, and it’s at least possible to see a theoretical reason for that. Preventing plastic pollution and all that. Saving the turtles in the oceans of the world.

Bu why outlaw free paper sacks like this? At places where they sell food to go?

Are they worried  about paper pollution? Hardly. Are these little bags supposed to be “reusable checkout bags” of the type for which the majority in Salem demands we pay 5 cents each? No, the advice printed on these bags — in English and French, no less — is not to reuse them but to recycle them or put them in the compost pile.

The only possible reason for expanding the law to outlaw the routine courtesy of putting your ready-to-eat food purchases in a bag for you, a century-old standard practice wherever they sell food to go, is to embarrass the employees and irritate their customers.

Mission accomplished, I would say.

You’d think an irksome little law like this would be ignored. But no. Not in Oregon, the land where no law is too irrational to be obeyed. After all, we still don’t pump our own gas, not because we can’t but because there’s a law. (hh)

42 responses to “How this dumb law works: Check it out”