How best to slow speeders 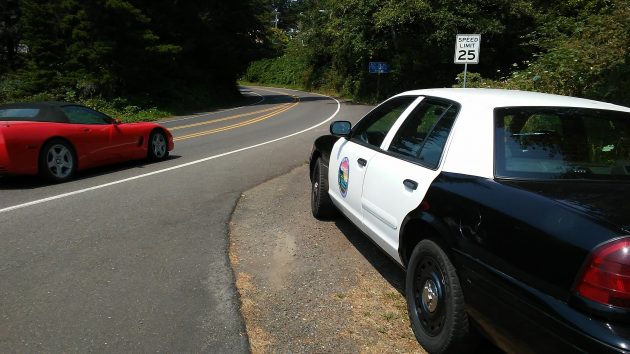 It looks like a police patrol car, but it would be more convincing if it still had a light bar on the roof.

This is one way — the cheap way, if an old Crown Vic’s price is considered cheap — for little towns to encourage compliance with speed zones on Oregon highways. But the best way? Probably not.

Cities everywhere are trying to reduce speeding. The town of Yachats parked an old black-and-white on Highway 101 at the southern entrance to the 25-mph zone in the business district. Did it work? Not consistently, as far as I could tell on Thursday.

Millersburg, another small Oregon town without a police force of its own, might consider a different approach, judging by the agenda of the city council meeting on Aug. 8. “Plan for placement of radar speed signs on city roadways and financial related considerations.” That’s one of the items about which the agenda says Mayor Jim Lepin plans to talk.

Albany used to get complaints about motorists far exceeding the 40-mph speed limit on Spring Hill Drive coming into town. Benton County put up a couple of those radar signs last year, and according to all accounts, and as I saw one evening, they proved effective.

The radar signs tell drivers how fast they are going. They flash at speeders and are hard to ignore. Most drivers slow down right away if the sign tells them they’re going too fast.

In Medford, radar signs are backed up with enforcement, meaning radar-activated cameras that catch speeders. Just watch drivers slow down when the sign flashes that they’re going 35 in the 30-mph zone of West Main.

The radar signs on Spring Hill cost between $10,000 and $11,000 to purchase and install, I was told at the time. According to the online ads, you can get a used Crown Victoria Police Interceptor for between $7,000 and $8,000 and park it by the side of the road.

The advantage of the Crown Vic is that unlike radar signs, you can also drive it. The downside is that people figure out pretty quick that it’s an unmanned decoy. The upside of radar signs is that they actually slow drivers down. (hh)


8 responses to “How best to slow speeders”