How Albany got the Swan Lakes – Hasso Hering

How Albany got the Swan Lakes 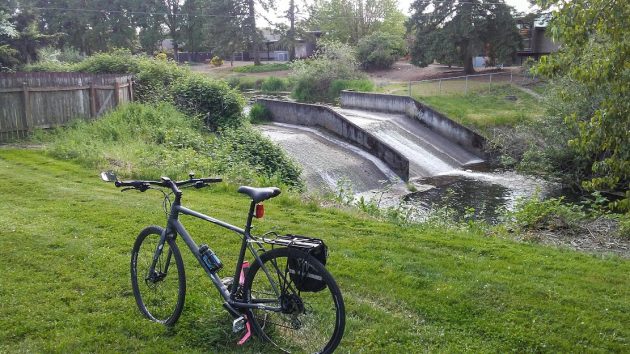 Looking at the structure that dams Cox Creek to form Albany’s Swan Lakes on May 7.

On a generally aimless ride around town the other afternoon, I came across this low dam and wondered when it was built and by whom.

The dam — maybe it’s properly called a weir — is near where Bain Street ends in a cul-de-sac. It spans Cox Creek to form the two Swan Lakes in Albany’s Santiam Neighborhood. You can see it from a footpath that leads from the end of Bain to Pacific Boulevard.

As you might expect from just looking at it, the structure is not all that old. The houses on both the north and south shores of the lakes — those I looked up, anyway — were built during the early 1960s. So I guessed the lakes and the dam that forms them date from that era too.

For the details, I turned to Gorden Steffensmeier in the Albany Public Works engineering section, who has access to city records on that sort of thing.

“The Swan Lakes, as well as Timber Linn Lake, were created around 1957 when I-5 was built,” Steffensmeier told me. “The soil from the banks of Cox Creek was used as fill dirt for I-5. Removing the soil created the lakes. At that same time ‘Freeway Addition’ subdivision was platted, including North Shore Drive, South Shore Drive, and Bain Street. So, that subdivision was formed around the lakes that ODOT built. That I-5 construction also wiped out the Albany airport and relocated it to the east.”

Did the highway department also build the dam or the bridge that carries Bain Street across the isthmus between the two ponds? On that, the records shed no light.

“City street plans show that the work on the Bain Street structure was to be ‘done by others,'” Steffensmeier reports. Maybe those “others” built the dam as well. I’ll be grateful if somebody who happens to know this detail will let me know. (hh)

4 responses to “How Albany got the Swan Lakes”