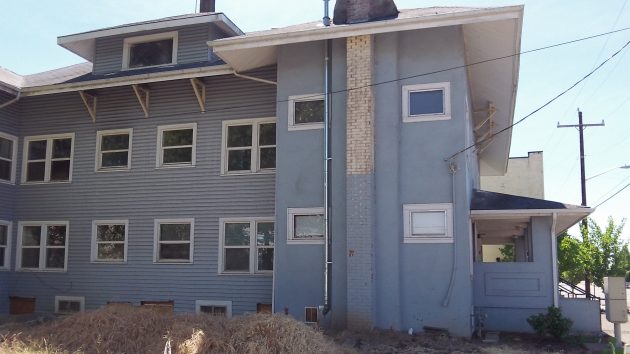 In six years this apartment building, empty for now, will be 100 years old.

We drive by this place on Albany’s First Avenue S.E. all the time. But I had not noticed it was vacant until I rode it past it, slowly, on my bike last month.

It’s been empty since last year, I learned from Scott Lepman. His company, Glorietta Bay LLC, bought the place in January 2015 for $214,000, according to the online records of the Linn County tax department.

The records also say that this apartment building was built in 1922. The tax assessor thinks it has a real market value of $346,510, but its maximum assessed value last year was $205,490. There are two stories and a basement, totaling about 10,600 square feet, and the photo makes it appear there is an attic as well.

Lepman was one of the people attending a City Hall meeting on downtown development Monday, and I had a chance to ask him about 222 First Avenue East. Over the years the place had acquired kind of a threadbare look. The new owners are talking with an architect. They intend to renovate the place and modernize the 19 apartments inside.

Judging by the other central Albany apartment projects that Lepman and his brother Spencer have completed, starting with the Jefferson Lofts more than a decade ago, this renovation should be a welcome addition to the supply of decent housing downtown. (hh)