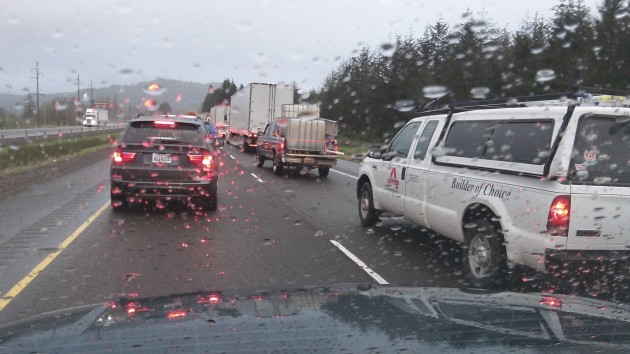 The bill would not apply when traffic is congested, as it was on this day.

In the spirit of passing laws for the hell of it, whether they do any good or not, which is the prevailing spirit this legislative session, the Oregon House has approved a bill to try to keep drivers from hogging the left lane on our highways, mostly meaning the freeways.

This is House Bill 3414, cosponsored by Sen. Ginny Burdick. The Portland Democrat has tried to pass similar legislation before, and this time she is halfway there. On April 21 the bill cleared the House on a vote of 33-26. Most Democrats voted yes, most Republicans no.

The bill says that on multi-lane highways with posted speeds of 45 mph and greater, it’s an offense punishable by up to a $1,000 fine to drive in the left lane except when passing or preparing to pass, or to make a left turn, or to make room for traffic entering the road from the right (plus some other exceptions).

If this becomes law, you know the effect it’s going to have: A few more drivers are going to get tickets, and that’s about all. The reasons people now stay in the left lane for longer than they should are not going to go away. The main one is not being able to get back in the passing lane once you have left it. Another is that sometimes, the pavement is bumpier in the right lane, having been hammered by heavy trucks more than the left.

And sometimes it’s just easier and — we hope — safer to stay in one lane rather than scooting back and forth. If you keep an eye on the mirror and make way for anything coming up fast from behind, what’s the harm? Yes, it’s aggravating to be stuck for a few seconds behind some guy driving 64 mph in the fast lane. But when this happens, how likely is a cop to be on hand to pull him over and enforce this law?

The House has passed the bill, but maybe the Senate will have better sense. That’s a big maybe. One bill that really would help move traffic along, Sen. Floyd Prozanski’s SB 459 to raise the freeway speed limit to 70 mph, has been sent to the Senate Rules Committee, which has scheduled no action on it yet and where it may get stuck. (hh)