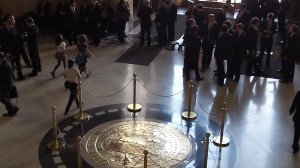 At the Capitol: Every citizen would be a voter too.

Over the objections of 28 members, mostly Republicans, the Oregon House has passed a curious bill that aims to get every citizen in the state registered as a voter whether they want to be or not.

It would work this way. The DMV has a record of every citizen with a driver’s license. Under HB 3521, if passed by the Senate, the DMV would be required to send its database including digital signatures to the secretary of state. That agency then would register as voters those who haven’t registered on their own. Then the state would send the new people a notice asking them to choose or decline to choose a party designation, and also giving them the option of not being registered at all.

Democrats including Kate Brown, the secretary of state, figure this will yield more registered Democrats and will also get more people to vote. But I wonder. If large percentages of registered voters don’t care to vote — as now — does it make sense to add people to the voter rolls who have already demonstrated, by failing to register on their own, that they have no interest in elections at all?

With voting by mail and in other ways, Oregon politicians keep trying to increase voter participation. It hasn’t worked. Our voter turnout remains modest. People have a right not to vote, and there’s no need for the state to push them, especially if they don’t even sign up on their own. (hh)

From Tom Cordier:  Automatically adding registered voter names to the rolls will have a negative impact on all petition processes in Oregon. The last (Albany initiative) special election required the collection of about 3,800 signatures from registered voters (15%). We had about a 32% turnout. The legislators should disapprove this bill. If people want to be registered, they should register. It is not difficult. This looks like the nanny state in overdrive.