Hope they catch whoever did this 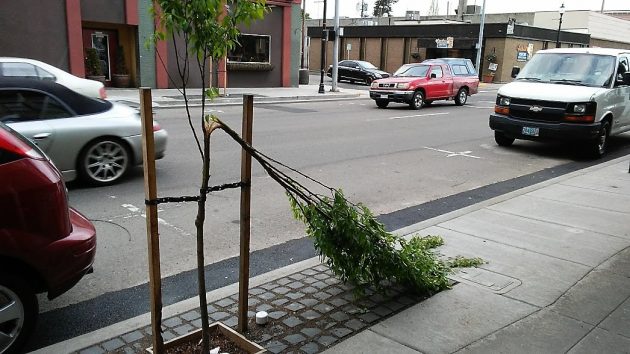 On Lyon Street, one of the victims of the nighttime tree butcher.

Phyllis Richards was driving down Lyon Street this afternoon on her way home to North Albany. “I was so disappointed to see that someone has damaged many of our new trees,” she told me. “Who would be so destructive as to enjoy doing that?”

Good question. The answer: Someone trying to demonstrate his profound stupidity and various other shortcomings. Someone whose existence suggests that evolution works backward too.

We don’t know who it is. But City Manager Peter Troedsson told city council members in an email the Albany police were trying to obtain any video that might be available from businesses in the area. So there’s an outside chance the person responsble might be called to answer for the destruction.

I counted 11 newly planted trees damaged along the left side of Lyon Street. Their slender trunks were snapped off about five or six feet up. These pink cherries were among the more than 200 trees of various varieties planted as part of Albany’s downtown streetscape beautification program.

The damage was done during the night from Saturday to Sunday. Rick Barnett of the Albany Parks Department, who serves as the city forester, said in an email there was other damage too, such as overturned planters on First Avenue.

The parks crew plans to take out the damaged trees Tuesday or Wednesday. Barnett estimated that replacing them may cost up to $400 per tree as pavers in the tree wells will have to be removed and then reset. The best time for tree planting is past, though, so the replacement question is still unresolved.

In his email to the council, Troedsson said, “I’ll also admit to being quite angry that someone should perform such a senseless and destructive act.” 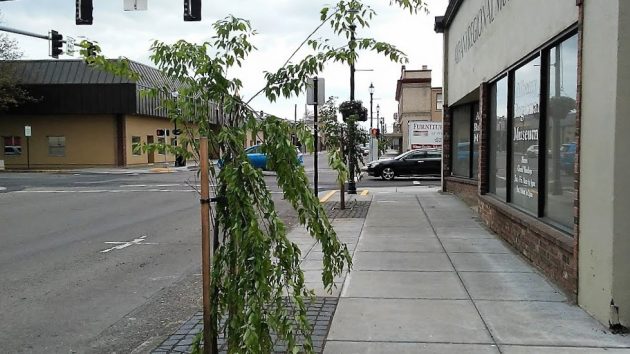 Another view of some of the broken young trees on Lyon Street Monday.


19 responses to “Hope they catch whoever did this”