Inside a deep pit near the end of Southeast Marion Street, construction is well underway on the foundations of a high-pressure furnace for the Albany metals industry. On Tuesday I took a look at the site.

Gerding Builders is constructing the facility for Stack Metallurgical of Portland, which plans to install an HIP furnace at the site. The initials stand for “hot isostatic pressing,” a manufacturing process to reduce the porosity of metal such as titanium by subjecting it to temperatures up to 2280 degrees F and pressure — exerted with argon gas — of up to 29,000 pounds per square inch.

The project came to light in February, when the Albany City Council held an executive session closed to the public and then, in open session without further explanation, voted unanimously “to direct staff to develop a proposal for Stack Metallurgical.” There has been no public explanation of what this “proposal” entails, and whatever it is has not been presented to the council for action.

Seth Sherry, the city’s economic development manager, continues to be mum about it. “I don’t have anything to report at this time,” he told me this morning.

What is known about the project comes from a memo by John Pascone, president of the Albany-Millersburg Economic Development Corp. He wrote the memo in support of granting Stack a five-year property tax exemption, which both Albany and Linn County as sponsors of a local enterprise zone have approved.

The memo said Stack was planning to make an Albany investment of almost $30 million, the biggest part of which would be the $20 million HIP furnace already on order. (The machine is made in Sweden.) The Albany facility would hire six to 18 employees.

The construction at 4322 Marion St. S.E. is proceeding under a preliminary building permit. The permit is for the foundation, accessible routes and parking, and underground plumbing only. A full building permit would not be approved, the version available online says, until the city approves “building design and engineering, along with a hazardous materials inventory statement for gas storage, cooling towers, and cryo unit areas.”

So how deep it that construction pit for the foundations? I’m not sure, but there’s a staircase of 27 steps from the bottom to the top.(hh) 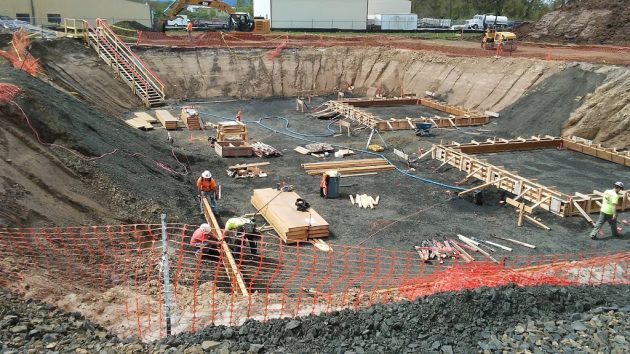 The pit for housing the HIP project at 4322 Marion St. S.E. as it looked on Tuesday.

19 responses to “‘HIP’ project in South Albany: Taking a look”