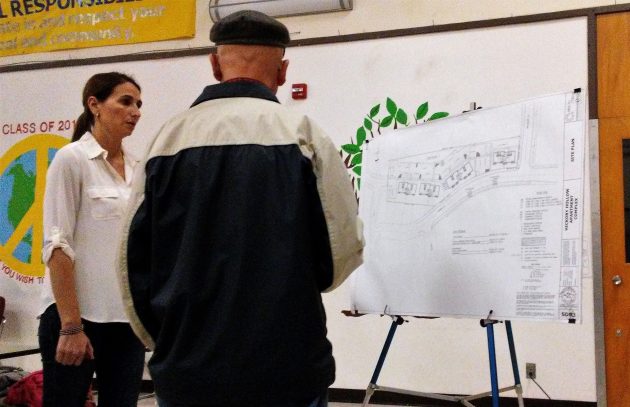 Brandie Dalton of Multi/Tech Engineering explains something about the apartment plans.

A proposed 48-unit apartment complex in North Albany, the first in that part of the city, has neighbors concerned about its effects on traffic, privacy, and the value of their homes.

About 25 nearby property owners and residents turned up for a community meeting Wednesday night at North Albany Middle School.

Two representatives of Multi/Tech Engineering Services of Salem had called the meeting to explain a Salem developer’s plans for the 2.25-acre site at 720 Hickory St. N.W. They said the name of the developer would become public when a site plan is filed with the Albany planning division. The developer is buying the property from the Olympia, Wash., family that owns it.

Approving the site plan will be up to the planning staff. The site is split between two zones and, according to the city, apartments are allowed outright in both.

The name of the project is “Hickory Hollow.” The layout calls for four three-story buildings containing 48 units and 94 parking spaces, along with two access points off Hickory, landscaped grounds, and two open spaces designated as play areas. There would be 12 one-bedroom apartments, 24 with two bedrooms each, and 12 with three bedrooms. Rents would be based on the market and would not be subsidized. It would not be low-income housing. Fences would separate the parcel from neighboring residences. A manager’s office would be on site.

The neighbors’ concerns were many and varied: More traffic on Hickory Street and North Albany Road, which they consider inadequate to handle it; more vehicles parked on the street; second stories overlooking adjacent single-family houses; a decline in the neighborhood’s quality of life and home values; the safety of children walking to nearby elementary and middle schools; and indeed the capacity of schools to hold more children.

Some criticized city street planning for the area as inadequate, and they called for a traffic impact study.

The developer’s representatives, Brandie Dalton and Brian M. Grenz, said many of the concerns were a matter for the city or the school district, not the developer. Their point was that the property was zoned for the kind of project being proposed, and the plans would go through the city’s land-use process to make sure they complied with all requirements. They expect construction to start this summer after the city approval process has run its course. (hh) 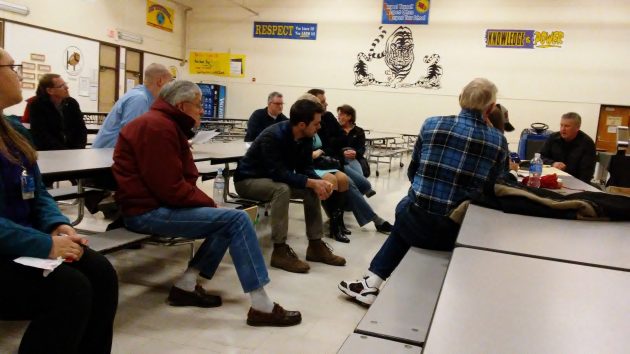 Some of the neighbors at the community meeting on “Hickory Hollow.”

This story has been corrected to show that the buildings would be three stories tall, not two. Thanks to those who pointed out my error. (hh)