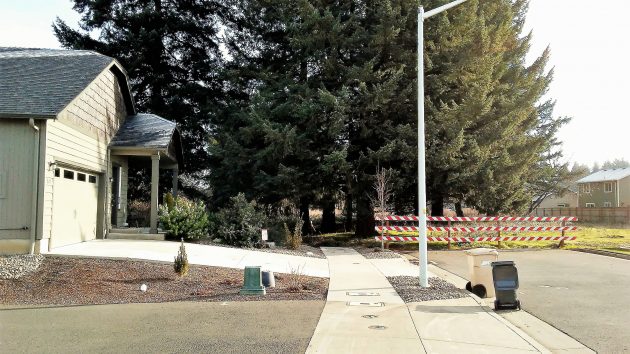 The barricade marks what will be the west entry to the Hickory Hollow apartments.

A Salem company has filed a site plan application for “Hickory Hollow,” a 48-unit apartment complex off Hickory Street N.W., the first of its kind in North Albany. The filing follows a meeting in January, when neighbors voiced their concerns.

Multi/Tech Engineering Services of Salem submitted the site plan for city review and approval on behalf of the developer, identified as ORREO LLC. According to the secretary of state’s online records, Charles James Weathers, who listed an address in southeast Salem, organized the limited liability company in 2014 for the purpose of real estate investment.

Melissa Anderson, a planner in the Albany Community Development Department, says a notice of the filing will be sent to surrounding property owners “in the near future.” The zoning of the 2.25-acre site at 720 Hickory N.W. allows apartments. All that is needed is a review by the planning staff to see that the project meets requirements of the development code.

At the January meeting, attended by about two dozen neighbors, residents worried about the effect of the project on traffic, schools, privacy and the value of their homes.

The plan shows 92 parking spaces, 50 of them of standard size, 37 for compacts, and five designated as handicapped spaces. There will be 12 bicycle spaces, six of them covered. A six-foot wooden fence is shown between the project and adjacent properties. The plan shows about 40 feet of open space between the apartment blocks and houses on the south side.

The layout of the Hickory Hollow apartment project as submitted to the city.