Hey, this is NOT a dump! 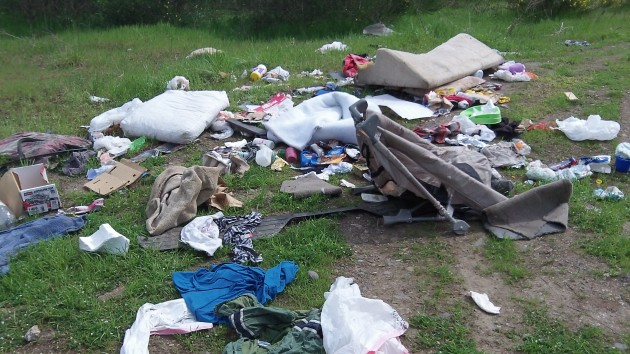 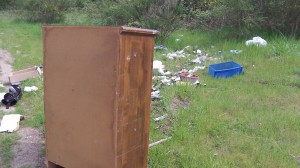 This is not what you want to see from any of Albany’s riverside trails. But whether you want to or not, it’s what you had to look at the last few days on a vacant lot off the Willamette river trail from Simpson Park to Bowman Park.

It looked as though somebody had emptied out his apartment or room of various kinds of junk including a chest of drawers and left this mess.

This was on part of a vacant six-acre property that once housed a sand and gravel operation and later a plant making roofing shakes of cement and sawdust. The Permawood factory was started over strong neighborhood opposition in the 1980s. Later it was bought by American Cemwood, became known as Permatek and was eventually closed. The property, on the east side of the north end of Geary Street, required extensive environmental cleanup before the new owners could consider developing it.

Last summer the present owners, based in Salem, had wanted to go ahead with their earlier plans to develop an apartment complex on the acreage. They met with city planners and nearby residents. The plans called for 120 apartments in three four-story buildings, with parking underneath. But as of this past week, the only thing that had happened on the property was that somebody used the place as a dump.

With drier weather, the unimproved trail between Simpson and Bowman parks is likely to start getting more use. It would be nice if the trash could be cleaned up. But doing so would require a dump truck and an organized effort and is too much for a volunteer passerby on his bike. (hh)