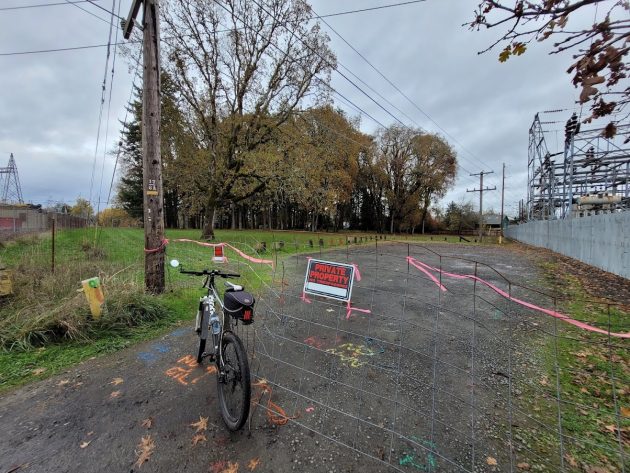 A wire fence and signs kept people out of the former Hazelwood Park on Nov. 11. It’s private property now.

In case you’ve not been keeping track, the sale of Albany’s Hazelwood Park to neighboring property owners has now been completed.

The city council had declared the 2½-acre park at 1999 Queen Ave. S.W. to be surplus property after the parks department said it did not need it and wanted to get rid of it to save on maintenance costs. And on Sept. 22 the council voted to sell the park for $120,000 to three sets of neighbors on Southwest 17th Avenue, whose yards back up to the park property.

The sale closed a few days ago, one of the neighbors, Nicole Schukow, announced on Facebook last week. And sure enough, by the time I rode past there to take a look on Nov. 11, the “Hazelwood Park” sign on Queen was gone, and public access to the land via the former park driveway was barred by a wire fence and signs proclaiming the place to be private property.

The buyers are Nicole and George Schukow, Sami and Todd Pulver, and Jill Zeller and Stephen Bray. They bought the park in order to save the stand of mature trees there and to incorporate the land, in three parts, as part of their backyards.

The families were the only bidders for the park after Creating Housing Coalition, the Albany nonprofit trying to build a village of about two dozen tiny houses, withdrew its offer, which was substantially higher.

The coalition said at the time it realized that development costs at that site would  have been too great for its project, called Hub City Village.

Since then, the coalition has tried to acquire a parcel of surplus land from the Greater Albany Public Schools but was outbid, Stacey Bartholomew, the group’s president, told me last week.

The Hub City group now has its eye on another property. They’ll no doubt announce it if and when they get it. (hh)


15 responses to “Hazelwood: Sale of little city park is complete”