Guns and the Oregon Constitution 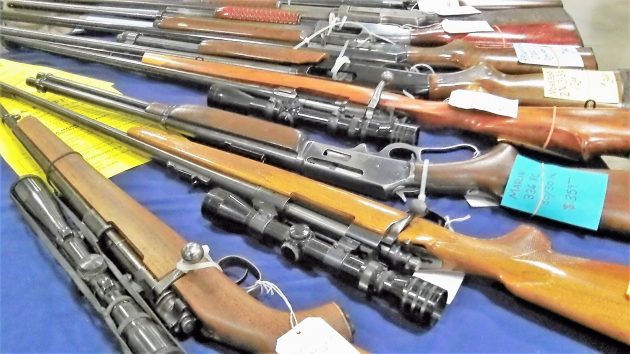 Would zip ties — like here at an Albany show — be enough to secure rifles under Initiative Proposal 44?

In the debate about gun control, it is worth remembering what the Oregon Constitution actually says, and then check what the court has said it means.

Two initiative proposals are in the works. No. 43 would ban the sale of the most popular semiautomatic rifles and handguns, labeled “assault weapons” in the bill, and magazines holding more than 10 rounds. People who already own these items would be barred from using them except at ranges and would have to register them or be guilty of a felony. The other proposal, No. 44, among other things would require firearms to be locked away, which most people already do, or stored with trigger or cable locks.

Section 27 of Article 1 of the Oregon Constitution says, “The people shall have the right to bear arms for the defence of themselves, and the State, but the Military shall be kept in strict subordination to the civil power.”

The Oregon Supreme Court interpreted Section 27 for the first time in 1980. Justice Berkeley Lent, who would become the chief justice two years later, wrote the decision in State v. Kessler. He traced the Oregon constitutional language of 1859 through several earlier state constitutions all the way to the 1689 Bill of Rights in England, which guaranteed that Protestants could have “arms for their defense.”

The opinion confirms that in its historical context, the Oregon right is meant to protect liberty against government oppression — oppression through a standing army, for instance — while also protecting a citizen’s right to self-defense.

In 2018, it may seem over the top and generally unfeasible to expect citizens to arm themselves against government abuses. But listen to Justice Lent: “Our task, in construing a constitutional provision, is to respect the principles given the status of constitutional guarantees and limitations by the drafters; it is not to abandon these principles when this fits the needs of the moment.”

Also from the historical context, the court concluded that “arms” meant the kind of weapons “used by the settlers for both personal and military defense,” but not “cannon or other heavy ordnance not kept by militiamen or private citizens.”

Today, the term “assault weapons” covers rifles commonly used by people engaged in “military defense.” So ownership and use of those rifles by citizens for lawful purposes would seem to be protected, according to the court in Kessler. The court will face that issue if Initiative 43 becomes law.

As for self-defense — against home invasions, for instance — a weapon disabled with a cable lock would not be of much use. (“Hold on there, Mr. Intruder, wait a sec while I find the key and get this thing undone, OK?”) By requiring those precautions, Initiative Proposal 44 likely also runs afoul of what Section 27 of our state constitution guarantees. (hh)


31 responses to “Guns and the Oregon Constitution”