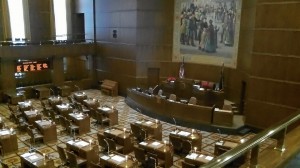 In the Oregon Senate, a bill to restrict some guns or magazines is expected to be introduced when the legislature convenes in 2013.

Everywhere you turn now, on the air and in print, there is talk about new efforts at more “gun control.” Nobody so far has explained what that would mean in detail, and depending on the details, how it would prevent shootings in places where there are a lot of people, whether it’s an assembly hall at Fort Hood, a political rally, a shopping mall, a movie theater or a grade school full of little kids.

A couple of senators want to re-enact a “ban on assault rifles.” Even assuming lawmakers can figure out exactly what they mean by “assault rifles,” what kind of ban are they talking about? A ban on manufacturing, or on imports? A ban on sales, which also would be relatively easy to enforce? Or are they talking about a ban on ownership? If that’s what they mean, they would have to be prepared for drastic measures to confiscate all the ones now in private hands.

The same question comes up if we’re talking about a ban on “high-capacity” magazines, or the semi -automatic weapons in which such magazines can be used. Would the Oregon legislature or Congress be willing to outlaw ownership of those items? Would they expect their owners to hand them over?

Or would state and federal lawmakers be willing to authorize attempts to round up all the firearms or gun components that they are intending to ban? And would they be willing to set aside a part of the Bill of Rights to do so? Maybe not, but Congress was perfectly willing to trample on the Bill of Rights after another horrible event, on 9/11/2001. Perfectly innocent Americans still carry their shoes in airports and can be barred from traveling by air. So don’t expect words on parchment to deflect attacks on any of our civil rights when emotions run high. (hh)